Flashback to 2011 and I got to meet the coolest rapper I'd ever gotten to see live. Opening for The Sounds and The Limousines in Cincinnati, I had the opportunity to talk to K.Flay after one of the most dynamic sets ever. This woman commanded the room and absolutely brought the energy up so high in the venue it was bananas. This was before "Blood in the Cut" and "Champagne" . This was back when she was much more indie and less of a household name. She was raw and honest and those are qualities that have never changed about her. She doesn't make music for anyone else but herself. Back in the day, I said about her:


"As an independent MC, I think she has more to prove that mainstream rappers because she doesn't have a production team writing for her and as an artist, I can see how that would be challenging.  What you don't see on paper though, is that this girl is bad.  She has breath control and can flow for days.  I don't know how many syllables she can spit per minute but she is on it.  Her voice has this raspy-ness to it that is punctuated with these stops that just enhance the her whole feel.  I want to put her in the same category as other independent MCs like Theophilus London and Matisyahu because I think that's where she deserves to be." 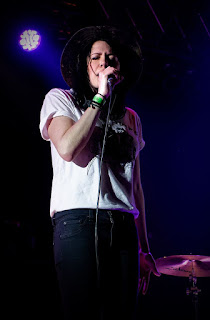 So let's talk about "This Baby Don't Cry", her latest single that's snatching wigs all over the internet. She's created a song about self love and treating yourself with the utmost respect because you deserve it and you are amazing just as you are on. She talks about all the thoughts and feelings that keep us up at night with self doubt and questioning our worth until the day you realize you don't need to be wrapped up in all that and that you should just be yourself and fuck everyone that doesn't get you. You don't have anything to prove to anyone but yourself. You don't have to put up with the bullshit and the garbage that pollutes your world and once you fully realize yourself and who you are, life is amazing.
at April 29, 2019

Email ThisBlogThis!Share to TwitterShare to FacebookShare to Pinterest
Labels: K.Flay