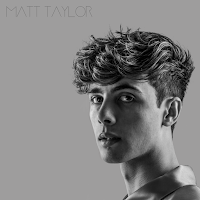 "...when did the all this silence get so loud / give me a second, I need a second to breathe before I lose my mind"

Hearing voices, opinions, attitudes from all over the world from people of all ages is one of the best things about having international access to music in today's technology driven society. Getting to hear 21 year old singer/songwriter Matt Taylor's new track, "Volatile" all the way from Brighton is one of the coolest things that's happened to me this week. Releasing his EP on 7 June, Matt is surely going to make a name for himself with his upbeat and effervescent brand of pop music. As a matter of fact, I think this track and the EP as a whole are pop perfection. Generally when I hear music that's this up, it's female vocalists I want to hear as in my ears, I appreciate more stripped down production from male vocalists but this dance/pop brand of music that Matt has created is brilliant. This can absolutely stand beside the Jonas Brothers, Bruno Mars or any other pop artist out there and this guy is 21....he's got a long career ahead of him if he keeps creating music this damn good. I am honestly in awe with this album.

So let's talk about the single, "Volatile"... The build up on this track is nuts. From his vocals from kind of speak-singing stand point to the track build up to the first pre-chorus and then just taking off. The "drop" is crazy good and the track as a whole makes me think of a roller coaster. Climbing up that first hill and then just holding on until it comes back around to the station. Matt's vocals are amazing and this song is just great. I want so much for this song to be gigantic because it's that good. The song is about a relationship that's on the rocks and that if both partners come together and talk and have open and honest communication there is still something there that can be salvaged and made good but as it stands, things are just so volatile. And as volatile things tend to do, if not cared for, they'll explode. I cannot stress how good this track is. He's doing amazing things after he charted on the Irish Singles Chart on iTunes and has actually has written songs for Ariana Grande and Charli XCX. I'll have a full review on this album when it releases June 7th.
at May 31, 2019