I spend a great deal of time talking about feelings and emotions. Talking about how artists represent a deep seated part of ourselves that we may not have even thought about but there's also a whole side of music that is there to lift us up and just take us on a journey for a couple minutes. Just to help us escape from the day and drift off. 20 year old artist, Podge has created a dreamy track, "Yuka-Peno" that just sweeps you up and allows you to forget the world as you slip-slide into this landscape he's painting with beautiful, glitchy synths and syrupy vocals.  He says he's influenced by the Japanese maga series, Nichijou and Japanese musician, Cornelius. 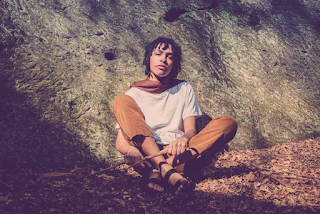 I feel like this could be a track in a sequence in an anime series as it's quirky and fun. Just helps you escape for a minute.  He released an entire album of tracks he's been recording in his bedroom called, "A Hero Appears" and if they're anything like this, that whole album will just be something cool to drift off and forget your cares for a while. Get out and support him and show him love. I feel like fresh voices are always welcome as are unconventional points of view in music as it helps us explore worlds outside ourselves.
at April 18, 2019

Email ThisBlogThis!Share to TwitterShare to FacebookShare to Pinterest
Labels: Podge