What blows me away is this man's vocal range and control.  When you have what appears to be 2 distinct vocals coming from the same human being, it's difficult to grasp the complexity without seeing it happen in person. That's exactly what Kit Walters has done in their latest video, he's stripped this song down to it's bare essentials and somehow has taken a song that's full of angst and rage and traded all that in for a sultry, swagger that reeks of sex appeal.  The acoustic version of "No Mercy" hits all the places in your brain that are stimulated by the idea of power and control but it hits them in a much more careful manner.  This time, it's not hardcore violence that's being triggered in the brain, it's something more dark and vivid.  Something primal that we all have hidden deep inside that we only let out when the lights are out and we're all alone but secretly we want to share it with the world.  It's that primal area of the brain the controls the same flight or flight instinct that both versions of this song trigger.  In the original song, you get the aggression that makes you want to rage and take the power back whereas this version of the song, you want the same thing but the manner in which you do it is much more subversive.  You're more controlling and full of dark directives with this version than you would be with the full out version of the song.

Kit Walters knows exactly how to handle his instrument and his fans.  He is giving you all the gateway you need to get hooked on his brand and then he reels you in tighter and tighter.  This quality of pop music doesn't come along very often and when it does it generally flys under the radar for a bit until someone stumbles across it, realizes how it makes them feel and then does something with it.  I guarantee within the next 2 seasons of Teen Wolf or The Vampire Diaries, you will hear Kit on the soundtrack and it'll catch the world off guard but those of us in the know will be standing there waiting to tell the world, "I told you so".
at February 25, 2015 No comments:

Most people only know Lucian Piane as the man behind the lyrics of RuPaul and they may not know that he has recorded some of his own tracks as well.  Way back in November of 2010, Lucian released, "Maybe They Know"; an EP that has 2 tracks on it "Maybe They Know" and "Tell Me, Tell Me".  Both of these songs are gorgeous and could easily stand up to any artist on the pop charts.  Neither song sounds dated and both have an exceptionally timeless quality to them.  They are brilliantly structured and just have an ease of purpose to them. 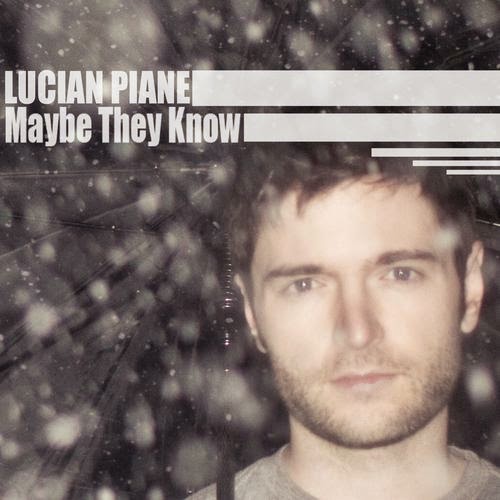 "Maybe They Know" is a languid traipse through a relationship and how it's perceived that just gently brings you along with it.  The song makes absolutely no demands from the listener, only that you're there as it draws you from start to finish.  Lucian's vocals over the verses are set about the same volume as the track which allows them to simply become part of the whole.  It's not until the chorus where the vocals are a bit louder and you pay attention to what he's saying a little more than you had previously.  Programming like this can be tricky if it's not done right and you can cause listeners to pull away from the track but this is done just right and builds the right amount of drama into the track.  It makes you lean into your speakers/earbuds a little deeper which makes you become more involved in the track.

"Tell Me, Tell Me" is vaguely reminiscent of a song that would have been released alongside a Beatles track.  There's something a bit mod about it and the overall quality of the song is just this dreamy romance of a song that I get lost in every single time I listen to it.  I've written entire movies in my head around this song and have cast it with every conceivable cast known to man.  The instrumentation in the song is so strong, the strings, the percussion - hell even the xylophone is carefully used in the song to fill it out into this gorgeous number.  It starts as two lovers are talking about what the future holds and turns as they run into each other after an extended time apart and while there's not an immediate rush of emotion, there is a build up of feelings about how long they've been apart and how things have changed over the years.  I think it's a song that talks about not taking for granted the relationships you have because in the blink of an eye, you'll be standing on a street corner after you've run into that person you haven't thought about in years and you'll be awash with years of "could haves".

I wish there was more of his catalog out there because he not only has a brilliant way with words and the crafting of music but his voice is simply gorgeous.  I hope he reads this and sees that there is a want/need for him to step out on his own every now and then and let his voice be heard.
at February 24, 2015 No comments:


Ed Sheeran can really do no wrong. His voice is nearly flawless in my opinion and then to pair him with uber-producer, Rudimental is just a genius move.  The track has every quality of an Ed Sheeran song so all of his fans that know and love his voice will appreciate it but with the addition of the hardcore electro beat, it takes the song to a much deeper place.  It's got more body, more depth and more bite.  I think it makes for a more interesting song because of all the layering that's been done.

Not a whole lot to say other than I am a fan and think this is a massive track.  Give it a listen and let me know what you think.
at February 15, 2015 No comments:

Charli XCX - Shake It Off (Cover)


You know how I feel about Charli XCX. You may or may not know how I feel about Taylor Swift's pop album (it's very good, in case you didn't know). Take both of them together and you get just about the best combination you could probably ask for. Charli has this exuberance to her performance and the way she looks at songs amazes me. There's a bit of the Runaways in this and I think that's an amazing thing. I think Charli would have made and amazing punk singer. I am a fan of the cover series on Live Lounge because it gives way to some amazing music.

Check this track out and let me know what you think.
at February 14, 2015 No comments: