With Garage Band, Ableton, Pro Tools and other software on the market, bedroom pop music has become so much easier to get into and artists like FINNEAS and Bille Eilish are proving that you absolutely don't need a label or a huge production studio behind you to make amazing music. So if you have a passion to do something, you should get out and do it. Up and coming producer Dryden shows you that you don't need anything other than a desire to express yourself in all his magnificent glory with his debut album, The Crystal Phantom. This album doesn't just serve you a bop or two, it is literally everything because he's doing his own thing. He's creating his own music and it's fucking glorious. It's crazy and it's unique and his voice is so strong and powerful because it's totally his and his alone. It's not being controlled by a label. There's no suit on the other end telling him who to be or how to be his most authentic self. This album brings me so much joy and I think that it will for anyone that listens to it. When you listen to his performance on these tracks, you can hear him smile. You can hear him overflowing with passion and joy as he lays it all out there for you to hear. 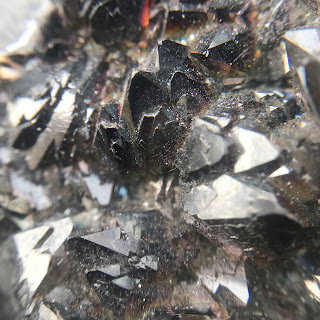 The Crystal Phantom is bursting with personality and it's beautiful. He proves that sometimes because you can absolutely means you should. Dryden shot for the stars and I think he fucking slays. There's a lyric in the track, "Get It Like That" where he says, "wig on evaporate" and what I don't think he understands is he's snatching all the weaves. Everyone that listens to this track is going to be bald cause it's not just your baby hairs he's coming for. It's the whole head of hair. His voice is so fresh and new. It's not like anything I've heard before and it just makes me smile from start to finish. I feel like a million when I listen to him. He has this swag about him and I think that comes from just being him that you'd never ever find anywhere else. I honestly feel pretty damn invincible when I'm listening to him.

Imma get into this album now....Like the crystals he sings about, this album is organic and it's natural with a vibe that grows around you and fills you with a sense of peace and tranquility against the electro beats he creates. I know I keep going on and on about how uniquely original he is and I mean every word of it. There is no one else out there like him and I am living for it. Every track I've listened to on his album makes me want to hear more and more from him. He makes me think of Big Dipper or Rica Shay when he raps because he's got an incredible amount of control to his delivery and flow and timing and delivery aren't something you can teach. Either you have it or you don't and baby, sis has got it.

The album jumps off with a "Moment for Me" moment, with "My Moment's Here" (how many more times can I say moment?) and I think that it's a damn good way to start out the track list. Taking your moment. Making a stand and saying, this is me. This is my time and you can be part of it or you can walk away cause I'm doing it on my own. Empowerment is my jam and anytime you can bring that to the table, you're gonna get all my coin.

We move from there to probably what I think should be the opening single, "Get it Like That". This is such a cool fucking song. The way it starts off in such a minimal space with just his rap and a small beat and it builds into this super catchy chorus pops off and I am here for it. His attitude during the rap is so fucking hot. I adore this song and I think there's magic in this song. His lyrical content is so strong and he knows how to write. These aren't just throw away songs. There's meat and bones underneath all the shiny packaging and it's phenomenal.

"Take Me Where You Want" is probably my favorite of all of 8 tracks but that's like trying to pick your favorite out of all your favorites because they all hit so hard in different aspects of what I need from them. If I could make one criticism of this song, I think if he would have used a bit more of an exotic string like a sitar or a shamisen, it would elevate this track to such new heights. You know I love hearing unexpected instruments but this song is damn near perfect in it's execution already.

"So High (Lavender Cloud)" has an amazing vocal performance by Dryden. His voice is so cool because it's his and I really love hearing him slip from singing to rapping because he does it effortlessly and this song just makes me close my eyes and go wherever he's taking me.

I never thought I'd say a song about yoga was a fucking banger but it damn sure is. "Namaste" is crazy good and it's got so much attitude behind it. I am here for it. It makes me smile and have a good time like the rest of the album. I never thought I'd be dancing to a track opening my chakras but here we are.

"Labradorite Eyes" just makes me smile like a goon. There's something so pure and innocent to this song. Labradorite is a crystal and it looks like the Aurora Borealis in crystal format so when you imagine that in someone's eyes, it's easy to see how you could get lost.

"Pure Gold" makes me sit down real deep and put on a stank face and just throw so much swag and attitude it's not funny. It's the Regina George of the album because I feel totally emotionally assaulted by this song in the absolute best way.

The album ends with "The Crystal Phantom" and it's so crazy good. Again, I never thought I'd be stoked about a song about crystals but Dryden has a way of making things just cool and funky and I want to listen to it. I want to know more about the crystals he's singing about.

Give this album a chance because it's really, really cool. Cooler than I've heard in a long time. Makes me want to sit at his table at lunch even though I know I really can't sit with him and his crew.... I want to watch him grow and be the artist that I know he's gonna be because he's fucking fantastic. He's bubbling over with talent and personality. He's got a point of view and people aren't going to get him but fuck them. He's not for them. Those people that do get him know exactly where he's been and want to be with him to see where he's going.
at May 03, 2019

Email ThisBlogThis!Share to TwitterShare to FacebookShare to Pinterest
Labels: Dryden