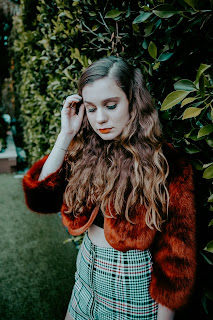 Mental health in music is something near and dear to me as one of the most important aspects of music is how the artist is able to connect with their fans and the greater populace by expressing thoughts and emotions in a digestible manner. There's a whole movement where artists are being much more open about their motivations behind music and they're sharing their journeys through the landscape of mental illness and self discovery. This isn't anything relatively new as it is receiving more publicity and the messages are being disseminated much easier due to music being available online and not just through terrestrial radio stations. So when a new artists comes along with an idea of who they are and what they want to represent, it's a breath of fresh as we get to hear new perspectives and standpoints in music.

With artists like Halsey, Lana, and Billie Eilish leading the charge into a much more emotionally fueled sphere of music, Florida based artist Cloe Wilder has a path being forged ahead of her that allows her the space to offer her brand of emotive music to the masses. Being heralded as a champion of accepting who you are and your own journey through your mind and mental health, Cloe offers her ideas on where she's been and her own experiences. With her new single, "Overthinking" she talks about something that more than one of us has done on a very regular basis. You spin a problem on it's axis over and over and over until you've run it into the ground and then you do it all over again. You come at it from different angles and you attempt to attack it over and over but you still get the same result. It causes sleepless nights and it creates havoc and chaos in our minds and we spend so much time not only beating up the problem but ourselves as well. More often than not, if we just step back from the problem and come back to it with fresh eyes, it isn't so daunting after all but we just get so wrapped up in the fight that we can't seem to disengage.

You take a concept that's as large as this type of struggle and you wonder how you're going to be able to distill it into a 4 minute pop song and it can be a daunting task as well; but with the capable songwriting skills of this young artist, it doesn't seem to be too difficult. Her lyrics and delivery are mercurial and they just slip and slide along the backing track. This is like an audio version of the lazy river where you just climb in and close your eyes and float along the soundscape she's creating. The track has a languid, easy feel to it that has an amazingly calming influence that while her lyrics are filled with anxious overtones - it all just sweeps you up and nestles you softly into a space where you can actually clear your head for a few minutes. I think this type of story telling and this ability she has lyrically and vocally to be able to guide the listener in this manner isn't something that can be taught. Cloe has a talent that shouldn't be taken for granted and I think that if she gets paired with the right producers, she'll be a household name just like Billie.

I am anxiously waiting to hear where she goes from here. I hope to see her work with some amazing people that show her that she'll be able to be much more than just the "sad girl" and I hope that her marketing/PR team see that as a box she should be climbing on top of to reach the next level instead of one they're trapping her in. Emotive music has been around forever and while it's amazing to have aspects of that in your tool belt, it shouldn't be all that you are. If you look at any of the outstandingly successful bands in history, especially through the New Romantic era of the 1980s, emotions fuel discussion but there has to be so much more than that otherwise you simply become a one note artist and that does no one any favors. She's got an incredible voice and if her songwriting skills are as impressive as I think they are, she's got a bright career ahead of her.

Make sure you give her some love on her socials and you subscribe to her YouTube for more content. I do believe she has the ability to become someone we'll go...Damn, I knew her when....

You can get "Overthinking" here ---> http://smarturl.it/cloeoverthinking