There's atmospheric and there's ethereal....then there's Hannah Cartwright. She appears to be able to float effortlessly in a plane high above the rest of us where she's channeling an amazing amount of power through her body. I haven't been moved by vocals like these since I fell in love with another Hannah, Hannah Reid of London Grammar. There's something so special about Hannah Cartwright's voice that reaches out into the void and pulls a familiar pain and ephemeral angst from the universe which she's able to deliver in an easily digestible manner and it resonates deeply within you because you've stared into the darkness with her. I don't feel like I'd want anyone on that journey with me other than her. She's just so evocative and expressive and I don't think I've really heard anyone with a voice as big as hers in a very long time. Her control is immaculate and she doesn't waste a breath. 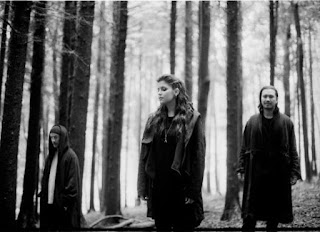 "Heavy Heart" is one of Snow Ghost's latest singles taken off their upcoming release, A Quiet Ritual and I can't fully express just how this song has affected me. It's massive. It's an experience and I think that it's going to affect people in many different ways. I think it's going to be exactly what you need it to be when you need it. It think that you're going to pull from your own experience and this song will touch you more deeply than just a pop tune. There's a resonance to this that stays with you. Haunting and deep, it's going to be a more profound experience than most people are going to expect on first go round. It's one of those songs that is very amorphous in how you hear it. Each play through I've heard something different. Whether it's the production or the hollow loneliness in Hannah's voice or it's how the synth bends and moves to carry her voice to you; this song is beautifully and artfully crafted.

I love how art has the ability to illicit a visceral reaction from the viewer/listener. I love how music can get inside you and become so personal that each person hears something different. I love how these artists can play upon everything you are and bring you along with them on this experience. In my life time, I've honestly had 2 "religious" experiences in conjunction with music but I have a deep seated feeling that if I had the opportunity to experience Snow Ghosts live that number would increase.

This album was recorded in a castle in Wiltshire and spent two years in the making. "A Quiet Ritual is written for an ensemble of classical and modern instruments including the carnyx, an Iron Age Celtic boar-headed horn excavated from a bog in Deskford, Scotland. This mix of instruments is indicative of the theme of timelessness common to this album and their previous work."
at April 24, 2019