It was 1988. Acid washed denim. Garbage Pail Kids. A ticket to the movies was $3.50. Transformers were the toy all the boys had to have and two young female pop start were battling it out for supremacy on the airwaves. You had the blonde, Debbie Gibson that was selling puppy dog eyes and 1950s sensibilities and you had rebellious Tiffany with her fiery red hair and sparkling personality fighting to be everyone's number one girl. Tiffany came out swinging with her GIGANTIC hit, "I Think We're Alone Now" and all bets were off. She was everything in my eyes as a young music fan. She was beautiful and she looked like she was having so much fun running through the malls in her video and it made me realize at an early age that pop music was the only way to go.


Flash forward 31 years. Yes, I said 31 years and Tiffany is back with an updated version of her mega hit and let me tell you, it not only hits me in all those nostalgic places it needs to but it never ever makes me feel like she's just trying to monopolize on her past career. It's current and it's fresh and it speaks to those of us of a certain age that have a bit of mileage on them. Those of us that have been kicked around my the universe but still have no plans of behaving. 40 something looks good on us and we're all still those rebellious youths somewhere deep inside. Needless to say, as I'm sitting here writing this I'm a bit giddy as this is fulfilling a pretty long life long fan of hers and pop music in general.

For me, 1988 was when I was really coming into my own taste for what music meant to me. I wasn't 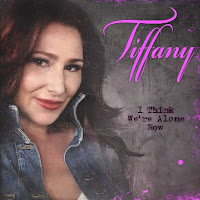 listening to my parents music any more. I was branching away from what my siblings were listening to and I was finding my own way and Tiffany stood there like a beacon guiding me to a whole new arena of music that would become the foundation in which I based the majority of musical interactions throughout the rest of my life. I could talk for hours about "Should Have Been Me" or "Promises Made" or "I Think We're Alone Now". I still to this day know the words by heart and I know I consecrated a cassette to the ground at some point after I wore it out listening to it over and over in my Walkman. It was a glorious time as I was discovering so many new ideas and making my own mind up for the first time.

So, let's talk about the 2019 version of "I Think We're Alone Now". Simply put, it doesn't miss a beat. It's still fresh and current. It's modern but it harkens back to those times when things were so brand new. She sounds amazing. There's not an off note in the track and I think the production team behind the updated version have something to be exceedingly proud of because they've created a fantastic song. She talks about her influences for the update as being, "the Foo Fighters, and maybe a little Go-Go's and Blondie mixed together" and you can hear that clearly. The guitars are a bit heavier. The synth is a bit stronger and it does a brilliant job of representing all that she stands for.

Having a bit of experience under her belt and having lived an incredibly full life she also says about the song, "It incorporates fun and family. They're wearing 'children behave' t-shirts. We're starting a new nation of 'children behavers!'” With a twist, though: "It's an adult version. 'Let's not behave. We've made it to our 40s. We're rockin' it!' Let's have some fun, shall we?" I think we all can use a bit more fun in our lives.
at April 19, 2019

Email ThisBlogThis!Share to TwitterShare to FacebookShare to Pinterest
Labels: Tiffany