After an extended hiatus, it's kind of appropriate that the first track I decide to write about is steeped in discussion about mental health. A lot has happened in my life over the past two years and I really lost my way. It's taken me this long to get back to where I need to be and music has always been that driving force. It's healed me. It's soothed me. It's created connections with a much larger body of creatives than I ever knew. And it's never let me down.

So imagine my reaction when this song slid across my desk. The official press release says,

“On the surface, it’s about looking after a friend who’s had a bad turn on a night out: That moment of immediate clarity you have when “something isn’t right and I need to do something about it”, but I guess it’s just about pulling people back from the edge when they aren’t feeling 100%.”
At any given point in any day, find me a person that's feeling 100%. I don't think you're going to be able to but this song tells you that you are wholly within your rights to not have to feel that way all the time. It's fine to acknowledge all that is going on in your life; to accept that you are a fighter, a coward, you are a bit of everything mixed up into one but the trick is to make sure that the people in your life, the ones that know you and I mean really know you are there with you. They are along for the ride steadying you, reassuring you, bolstering you. 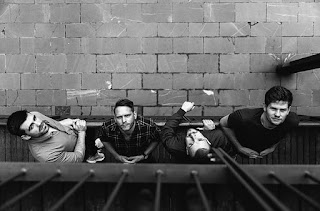 When you feel like you can't get out and you are trapped in the prison of your own mind, it's these people, it's this music that will help you. This song is frenetic. It's fervored. The tempo just rips through you and you feel like you are running as fast and as hard as you canto get away from all the negativity and all the shit that just piles up day after day. It's a flight of freedom from your own shackles. This is a modern take on "Eye of the Tiger". It's a battle anthem for your own mental health. It's a group of guys that know what you've experienced because you aren't alone and they're standing there, instruments in hand ready to go into war with you. They are standing strong beside you giving life to all the small voices in your head that remind you that you're going to be ok even though all the negativity seems to wash them away. They are helping you climb up out of the muck and leading you into the fray.

I've now listened to this song on repeat for the past 30 minutes so that I can just experience every single nuance and every single breath they're pumping into this and I have to say without a shadow of a doubt, this may be one of the most important songs I've heard in a long time. It's a song of hope. It's a song that reminds you to never ever give up.

We are all broken. We are all bruised. It's part of living and in the end we have to wear all those battle scars with pride but we have to remember that we are not alone and if takes four guys from London to give life to the emotions we're feeling then that's what we do. We let them. We become part of something with them and it's beautiful and it's good.