When I wrote about Cloe Wilder, I said that I hope they don't trap her in a box with kind of a gimmicky shtick in the form of the creepy girl. Sure, we've got artists like Billie Eilish, Halsey, Lana Del Ray all working the emotive angle and it's selling millions of records so the formula is proven. But there has to be talent and creativity and something we haven't heard before in an artist to make them stand out and with Jade Million's first single release of the year in "Escalators", I hope we've got something here. Being labeled a trap/pop artist, Jade has the vocal control and innate ability to deliver a performance to help her step out of that box she, too, could be painted into. 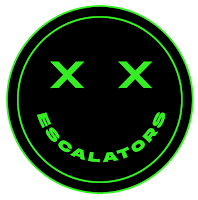 "Escalators" is a dope song with a fully realized sense of who and what it needs to be. From the beginning, the glitchy strings set the mood and the ambiance and it takes you on a lazy, easy journey til the end. It's languid. It's slow and sexy and it guides you along on an emotive journey that a lot of artists only dream of being able to create. This young woman is smart and savvy and you can hear it in what she does and how she represents herself. When the pre-chorus hits, a lot of producers would have went in a lot harder and the drop would have been much bigger but there is a lot of restraint shown here as it drops you just as far as it needs to. The ride from start to finish in this track is meticulously planned. It's even and it's a slow burn that you just sway back and forth through from start to finish.

I think escalators is being used as a gateway metaphor to a lot of different things here. Sipping on the serotonin your brain produces as it's happy and satisfied. Being in a place where the people and the atmosphere just bring you to a high point in life. Whether that's chemically engineered or socially. She talks about swimming in the after glow of some good sex and that's somewhere we've all been and it's done in a way in this song where it's not dirty or smutty. That's the sign of a great lyricist because it could border on trash and it doesn't. I like how it's sex positive and it celebrates it in a manner that isn't shameful. I dig the vibe of this song. It's sexy and the slowness of it just adds to the atmosphere. It gets you where you need to go without being in a rush and does it's own thing in it's own time. I am interested to hear her other singles this summer and see just what it is she has to offer more than this.