Coco and the Butterfields - Monsters EP 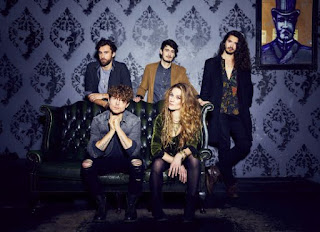 When I was introduced to Coco and the Butterfields, I had no idea what to expect. What I was handed was probably one of the best unknown groups of all time. While they are touring all over the UK and becoming one of the biggest touring groups ever, they don't get any radio play in my area of the world and that's a damn shame because the music they make is important and it's valid and it's good. On 24 May 2019, they released this EP and it just builds and swells inside of you as you listen to it. Coco and the Butterfields aren't simply musicians; they're storytellers. They have an innate ability to craft emotions into auditory art and it's more than just a toe tapping good time; don't get me wrong, it's an incredible experience musically but to say they're only musicians diminishes what they're doing at the core. It's one of the most incredible records I've heard in a long time. From the production to the lyrical content to the small quiet spaces they give you; this is so incredibly good. Tom and Dulcima's voices blend together in such a beautiful, rapturous harmony that you just settle in and let them tell you all the stories they ever wanted to. I don't like to make comparisons to other artists but like other bands with amazing co-vocalists: Heart, Fleetwood Mac, Of Monsters and Men, Delta Rae; they are such artisans when it comes to knowing exactly how to blend their vocals together and they give each other enough space to tell the stories they need to tell.

I fell in love "Monsters" as soon as it was sent to me to review. It doesn't matter which version of the song I hear, each gives me a different experience and they're all beautiful and it's amazing how a band can create a song that touches different places in your experience. I recommend you listen to the 3 different versions of the video on YouTube and see how much minor changes in a song can make in the over all presentation and feeling.

"Puppets" is such a cool conversation between Tom and Dulcima. It's this playful take on young relationships. The song starts out with Tom saying how she looked into his eyes and promised she would never leave and she responds by saying she couldn't make up her mind and was scared at what he meant to her. The song continues to go on about how all the little lies in a relationship add up but you have to make a decision to deal with them or just look at them as part of the relationship.

The tempo and pacing on "Animals" is frenetic. It's this amazingly charismatic song grabs your hand with the rapid fire percussion and you take off running from start to finish. Dulcima's lyric, "I'll dream of diamonds and you give me broken glass" is one of the coolest things ever. I think it says a lot about expectations versus reality. It's the most folk infused song on the record and it's amazing. Such a brilliant fusion of genres with the small addition of some synths and the vocals are so on point it's not even funny.

"Giants" is really the only song on the EP that I'm having a hard time discerning the meaning to. It's an amazing song and I adore it but I think I'm maybe getting lost in the overall feeling and vibe of the song versus focusing on the minutia of it. Maybe that's actually what the song is about, looking at life and relationships from a macro view instead of getting caught up in the small stuff as it all tends to be small stuff.

If you don't get lost in Dulcima's voice on "Robots", I don't think there's much hope for you. This song is gorgeous. Her voice is sublime. It's pure magic and to be able to be here, at the same time that she's creating art is an amazing honor. I want more and more people to know her name and to hear the power in her voice.

At the heart of this album, it's all about relationships and the various positive negative aspects that go into them. The building of trust to the breaking of those bonds and it's a powerful and evocative  journey from start to finish. You can get the album anywhere you consume media and I feel like if you don't, you're missing out on one of the best releases of 2019.

Email ThisBlogThis!Share to TwitterShare to FacebookShare to Pinterest
Labels: CoCo and the Butterfields