1993. I'm a junior in high school and an album has been released that will forever change the trajectory of my musical taste. A small techno group from the UK has unleashed "Music for the Jilted Generation" and my love affair with The Prodigy has begun. Jump ahead to June 4, 1997 - my 21st birthday and I'm in Atlanta Georgia at the Masquerade in a crowd of sweaty techno fans jumping around, dancing and listening to Keith Flint and Maxim spitting lyrics at the crowd as The Prodigy is on their Fat of the Land tour.  Imagine my surprise in 2019 when I am handed an album by another act from the UK that takes me back to a much simpler time in my life and floods me with nostalgia and stirs so many emotions in me. 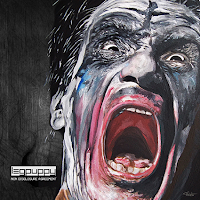 LegPuppy are absolutely blowing my mind with this new album. Driving beats. Synths that are next to God. Vocals that just take you to another dimension. This group is the group I never knew I needed them until I did. Utilizing Voi Vang on vocals as they do take them to a whole new level and it's good and it's dissentive and it has this whole attitude and vibe that's subversive and you get wrapped up in it. There are moments on this album where I honestly feel like I'm listening to a lost Prodigy album and I don't say that in a fashion that they've deliberately ripped off something that's been done but they're paying homage and they've tapped into the same primal and raw energy that Liam and the boys did all those years ago and it's amazing. The production is spot on and there's not a beat or a synth that isn't exactly where it should be. They've created a world that's dirty and it's sexy and it takes the piss. This album has been created and laid out in a way that the journey they take you on isn't so different than places you've been before, musically speaking as it were, its just now they're pulling the curtain back and showing you the grimy underbelly of it all.

The album starts of with a fully instrumental track, "Truth" and I'm immediately taken to the place I was the first time I heard "Break and Enter / Their Law" by The Prodigy and I'm awash with all those warm nostalgic feelings that continue to get stoked through out this album. Now, don't get me wrong...they're not living in the past. They're not doing something that should have been done almost 30 years ago. This is all current and it's new and it's fresh but it still knows it's roots and where it's come from. We go from "Truth" into "Tears" and we're introduced to Voi Vang. Her voice is pure and it's clean. It's the spot left when you white glove a table that's not been dusted for years. It's part of the whole but it's the part that's bright and shiny and new and it pulls you closer into this crazy world they've created. It's very Sneaker Pimps, very C.J. Bolland; paying homage but never appropriating.

"Nominate 10" comes right where it needs to be. There's nowhere you can go from "Tears" - this is the logical progression. It hits hard with a rap that's bold and it just shakes you back to reality from the siren song that's just ended. That's how I would absolute describe Voi's voice....siren like because you're just lulled into serenity even though it's against this pulsing backdrop of a song. But getting back to "Nominate 10".... it's a fantastic ride from start to finish and I was tapping my foot and bobbing along aggressively. It's not a song that I necessarily want to listen to in my car because it's going to find me driving the city streets at a speed that matches that amazing BPM.

"Speak, Talk, Speak" lampoons our communication and daily life in 2:19. It's like this song is roasting us without even trying because we are living in such a Black Mirror world and this is the background track in a time and space where all things are just wrong. This is kind of a horror story of a track because it holds up a microscope up to our lives and makes us examine them in less than 3 minutes. It's almost like a very broken palate cleanser between "Nominate 10" and "Twit Machine" because "Twit Machine" comes in hard too. This song is aggressive and it wants you to know right off the bat. Again, sticking with the whole communication vibe and social media addiction we've all become part of, this song brings to light all the things we do in between tapping and swiping. When the full on FOMO has set in and we have to make sure our lives are properly documented in the most appropriate Stepford way instead of actually living our lives.

"She's Lost Her Soul - Grade II" is hard. It's just a more sparse version of attack than what we've been dealt in the past couple tracks. It's more methodical about it's approach and the care it takes in spinning you in the web of darkness. The percussion and the beat just penetrate you and go right for the heart of you and it's deliberate. It has a message as well and reminds us that we all need to do our best to support live music. Without that, these artists aren't able to create because so much of the creation process happens in a give and take between the band and a live audience."Puctas Murint" is next and while I don't know the meaning of the title or what the song is fully about, you are still amped up and still keyed into this world they're continually reshaping around you. It's another short song but what it loses in length, it damn sure makes up for it in content and depth.

"Corgi Stop" is a trippy side quest of a song that makes you feel like you've landed in the poppy field in Oz. Again, a short-ish track, like a corgi's legs. I can't make out the lyrics on it but I do feel a bit alien. A bit like I've done some whippets or sucked helium out of a balloon.

The last track on the album, "NDA" is nuts. They've taken everything they have left, the kitchen sink and all and thrown it at you in this. The beat is bananas. It's got a jungle feel to it. This is where things go off the rails and get primal. This song is sexy as fuck and it's a joyous ride from start to finish. It's a huge track and it's the absolute high note the album HAD to end with. The builds and the swells are matched in intensity with the drops and if you close your eyes, this nearly 10 minute track just fills every part of you.

This album is going to be massive and it's going into heavy rotation in my collection and it proves that you don't have to have full lyrical content on every single song to build an emotional connection. It's brilliant and it's bad ass.  Make sure you pick it up. Preorder this damn thing now!

Email ThisBlogThis!Share to TwitterShare to FacebookShare to Pinterest
Labels: Legpuppy