Justin Ferre - Life on a Wire 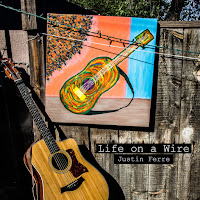 It's not very often that I have a legitimate visceral reaction to an artist. It's rare, actually. But when that one out of a million artists comes along and pours every single bit of who they are and what they stand for in their music; it's magic. Lightning in a bottle. Justin Ferre is one of those very few artists that I've had to listen to his album for days on end just to be able to fully grasp what it is he's done and what this music means to be because it's special. It's raw. It's honest and it's so minimally produced that it shows just how real what he's doing is.

His voice, sonically and idealistically, is beyond reproach and what he's weaving together through his outpouring of emotion is one of the most beautiful things I've heard in a long time. He's created something that people chase all their lives and it's here in eight songs. This isn't all there is to him and I know that with this much swirling around inside of him; I would be honored to say he's one of the most important singer/songwriters of our time.  It goes to prove that sometimes all you need is a desire and a guitar and the rest falls into place. Justin Ferre is an artist from Albuquerque and I have absolutely fallen head over heels for his voice. There's so much passion and honesty to every syllable he utters. It feels like he's taken every emotion I've felt and found the most amazing way to wrap them all up in these eight tracks. 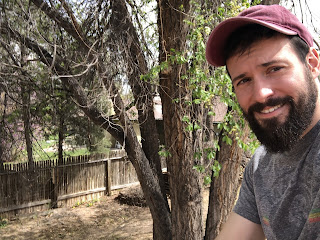 The rasp in his voice is one of my favorite things ever. It's like the raw edge of fabric or the edge of paper after you've torn it apart. When you close your eyes and listen to what he's saying and just how precise he is with his inflection it feels like everything. It's a light in the darkness. It's guiding you through your blackest days and it's pulling you up after you've fallen. It's salt of the earth. It's roots and it's leaves and it's all of those things. It's sometimes frantic and it's like there's just so much he has to say that the words are coming out at a rate he's not expecting but he's fighting to keep them all in order. It's every thing you've waited for him to say to you as you've made your way across the trials and tribulations life has thrown at you and he's wrapping his arm around you telling you that every thing will be ok.

I may be biased. I may have swooned and have had to take a minute after each of these songs to compose myself but what he's given the world is so much more than glitz and glamour. It's not sold out stadium shows. It's sitting in Grand Central Station listening to a street performer because if they don't get this out of them they'll explode. It's the tear stained notes you passed in high school to the first person that ever took your heart. It's the laughter you share with your best friends as you've had one too many drinks and you know that the next day's hangover is going to be worth it. It's the quiet moments you share because you know that there's nowhere else you should be than sitting there with them while they fall apart and are crying on your shoulder. I think this is the most important album I've heard this year. So let's talk about these tracks.

Finding
This song comes in easily and gently. It's almost as if he's asking permission to be part of your life for the next little while. And the fact that in the song he actually says he doesn't want to be a bother echoes the sentiment of the quietness of this song. Justin builds a landscape of emotion in minutes that so many people can't do in their lifetime. There's a politeness to this song that's honestly heart wrenching because it feels like he's willing to walk away from everything to give you the space to find yourself in spite of how he feels about you. He knows he doesn't want to and he knows that it's not what is necessarily easy but it's best.

Once a Day
Uplifting doesn't do this song justice. When I heard this for the first time, it was every affirmation I'd ever needed in my life. It was all the emotions I've felt in my smallest of moments when every bit of self doubt and every single feeling of worthlessness fell over me but there he was. Sitting with me. Letting me breathe. Letting me exist and reminding me that I'm not alone in this fight. It was every thing I've ever needed to hear and it was the unequivocal feeling that yes, things would get better. Every ounce of darkness was wiped away from my eyes and I could hold my head high and take that healing step forward again.

All I Hide
Simplicity and emotion. Acoustic guitars and violins combined are two of the of the most humanistic of all the instruments and he uses them like a genius in this track. There's a give and take in all relationships. When communication fails and all you have to rest on are actions and deeds, there are times when you lean on those feelings and the effort you've spent building toward today. And you are left with hope that even though you've made the best decisions you can through out it all; sometimes you have to let it go.

Fight for You
This album feels like it came from a place in Justin's life where he had to pick up the pieces of a relationship that was in the process of being dismantled. While he's heart broken that everything he's worked toward is slipping through his fingers, he knows that the best thing to do is walk away and let this man that he's loved walk away. He doesn't want to. He wants to fight. He wants to be reminded that there's something worth fighting for. That underneath all of it, there's still something there worth it all. All the pain. All the self doubt. All the conflict. It's all been worth it but he just has to look at Justin and tell him that yes, there is something there.

Under the Weather
The way the vocals are layered in this song gives so much weight and depth. They feel like the small voices in your head when you're being swallowed with self doubt and insecurity but when you think about those people in your life that have been there with you through it all, it doesn't seem so insurmountable. This song feels like so many times in my life where I've felt like I've lost my way and don't know which way to turn.

Dead Ends
The production in this song is perfection. It's Justin and his guitar. And it's beautiful. I'm taken to a time in my life when you miss someone so desperately but through geography or loss or heartbreak it feels like the whole world has fallen away. It feels like there's a person sized hole in your heart that you want to fix but you just don't know how. It's saltwater tears and hundred yard stares out across the horizon.

Falls Away
"I watch you look for tomorrow / while I'm standing right here"
Fuck. The words in this song just absolutely wrecked me. It doesn't matter how many times he walks away, you're going to take him back. This is it. There's nothing more. But he just leaves every time and you're left watching it all fall away. You know that this is right and this is good but it's never going to be enough.

Life on a Wire
When you're spending so much time balancing everything; love, career, adult responsibilities, relationships it's easy for your life to get out from under you and to feel like there's nothing left but the tightrope you're on. It feels like there's no one else that understands what you're going through and even though you stumble and fall, you have to get back up and do it all again. You brush off the bruises and the hardships and you continue fighting but when you know that you aren't alone. When you know that some one is there to catch you; it makes all the difference in the world. We all live our lives on a wire and most of us operate without a net and it's terrifying but the other side of the void isn't too far away when you've got support.

I feel like this album was a process of catharsis for Justin. I think it's going to touch a lot of people and it's going to resonate with anyone that's found them in a situation similar. I don't know any of the particulars in this album as to what his meaning was other than what I was able to personalize and infer into. I may have been in a totally different ball park of emotion but what he's been able to do is allow me the space to explore my thoughts and emotions while he lays out the soundtrack to my introspection and I'm thankful and grateful to him for that. I want you to listen to his album. I want you to buy this album. I want you to support this man because I think he's expressing things and telling stories like no one else in the music industry right now.
at May 29, 2019