Back in 2002 we were introduced to a New Zealander with a penchant for writing songs in his underwear.  "Gotta Get Thru This" was a break out hit that propelled him into stardom but Daniel Bedingfield wasn't able to keep momentum in the United States.  He had a few other chart successes off his debut album but nothing as high as "GGTT".  In 2004, he released Second First Impression to much critical applause and an outpouring of fan support but he wasn't able to generate much interest in the US. 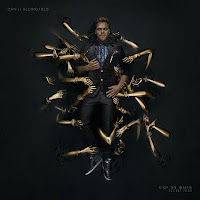 He's now released a free 5 track EP on his website titled, Stop the Traffik - Secret Fear and it's a helluva ride.  The EP has an incredible sound and it's so good to hear new material from Daniel.  Upon first listen, it appears that this EP was created on the verge of a horrible break up or at least that's the overwhelming theme woven throughout the album.

I have to say that my picks on the EP are "Secret Fear", "O.V.E.R. U.", and "Don't Write Me Off".  The other two tracks aren't bad they're just very jarring.  There's a lot of pent up anger in those songs and I think as much of a catharsis it was for Daniel, they just don't translate into anything more than just a ton of aggression.  "Rocks Off" takes several listens to get to the meat of it as it's can be repetitive and I think there  are parts where it seems like there needs to be more of a song attached to it. Kind of like it's an amazing intro to a song.  The video is pretty incredible though and I am glad he's still making videos.  I'm just glad there's more Daniel in the world because  I was a HUGE fan of his first release.  I want to see more from him in the future and you should too.

Daniel on the Web