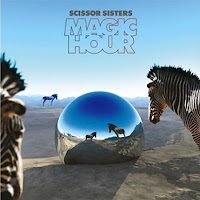 Let me start this off by saying if you are expecting Magic Hour to sound like any previous release by the Sisters, you are going to be mistaken.  This album is them all grown up.  They've been stepped on and pushed around by love and life and have a few battle scars to show.  They've had their fair share of experiences and it's those experiences that give them what they need to deliver the material in this album flawlessly.  Previous albums have all had raucous moments of excitement and glamour ("Night Work", "Skin This Cat", "Sex and Violence", "Paul McCartney", "She's My Man", "Kiss You Off", "Tits on the Radio", "Music is the Victim", "Filthy/Gorgeous") and there is no shortage of them on Magic Hour but what is different about this album may be the content.  The lyrical composition is more sincere and in a way, lovelorn.  Even though it was produced by Calvin Harris, Diplo and other huge producers what's underneath is still nothing but pure magic by the Sisters.

There are actually songs on this album that strike very close to home to me and I have a much stronger reaction to them then I do to others.  "Baby Come Home" and "Best In Me" need to be on the soundtrack to my life because they are my songs.  I've lived them both and I think there are a lot of people out there that have done the same.  There seems to be more music on this that has a very personal connection.  I think "Only The Horses" is an amazingly romantic song. The thought that you can just get so lost in someone that modern means cannot be used to bring you back.  The tone is so somber on the tracks without them trying to force it.

There have been other reviews that don't give them credit for the ballads on this album and want it to be an all out party like other albums have been but I appreciate what they've done because it shows range and depth.  It's no secret that I am very biased.  They are my favorite band and it's hard for me to find any bad in their work.  There are a few tracks that are a bit slower than others and there are a few that may take a little getting used too but all in all they all have a place and you just have to figure out where they belong in your soundtrack.