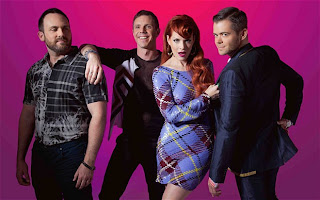 So many bloggers have been complaining that this album isn't Night Work.  It's not Night Work nor does it pretend to be.  I think as divergent as this album is from their previous releases, it is far strong enough to stand on it's own as the next logical step in the evolution of the band.  As I said in my other review, this album shows growth.  The Sisters aren't in their 20s anymore and I think it's important that their material has some age on it.  I think that's one of the problems I have with Madonna's new album... it still seems like she's mugging like a 20 year old when she should be showing her age in a mature manner.

So here's my track by track breakdown of the new album.  What are your opinions?  Are they different than mine?


Baby Come Home
This track was co-written by John Legend.  It just amazes me how a small band from NYC has grown to attract all these amazing artists to collaborate with them.  It also amazes me they have been releasing studio albums for almost 10 years now.  I think this song is very personal to me because I have been where Jake is (lyrically as it were).  It's a rough place to be but you know that they are coming home to sleep in the bed at night with you and most of the time, that's enough.  You should totally watch the performance of this track on the Graham Norton Show.  I think this is one of my favorite tracks on the album.

Keep Your Shoes On
This is the first of the super dance tracks on the album.  It's all about all kinds of things that Jake wants to do all the while your shoes are on.  It's in the same vein as “Filthy/Gorgeous” and other super ba-nay-nay tracks they've released over the years.  The percussion is going to drill this song into your head and you will be singing it much later as it will stay with you.

Inevitable
When you find out this track was co-written and produced by the Neptunes it adds another layer of depth to the track, it is a slow sultry vibe that could have certainly been written by the Bee Gees.  Jake's vocals are actually reminiscent of Robin Gibb which makes me see this song being played during Couple's Skate circa 1979 at your local Roller Rink.

Only The Horses
This track has gotten a lot of bad press because it sounds very "cookie cutter".  It's very "mainstream".  I say that's all rubbish.  Yes, Calvin Harris produced it but it's very Scissor Sisters.  I am a huge fan of this song because it touches me somewhere in my romantic place.  The video didn't do the song justice.  If they would have asked me for my treatment, I would have shown a couple running hand in hand through a very old forest being chased by some unseen threat.  A threat to their love, a love that has lasted all their lives and throughout the chase, there would be flashbacks to them doing the same thing as children.

Year of Living Dangerously
This song is HUGE but it's small at the same time.  There is something so ambitious about it and it pulls it off flawlessly.  Jake's falsetto during the middle eight being followed by the strings over the synth beat is just a delicious concoction that I am glad to swallow whole.  It's very ballad-esque without beating you over the head with the fact it's a ballad.

Let’s Have a Kiki
First off, I need a friend named Pickles.  This track reminds me of things off their demo albums and B-Sides.  It's “Backwoods Discotheque” and “Dr. I'm Only Seeing Dark” meets the spoken portions of “Music is the Victim” and “Filthy/Gorgeous”.  It's going to be a HUGE anthem in all the clubs and it is going to punctuate vocabularies all over the world.  Dive, Turn, WERQ!  I am a fan.

Shady Love
Jake and Azalea Banks run rings around each other on this track.  At first it's kind of jarring because it's so different than anything they've ever done before.  This is definitely an acquired taste.  The rap is kind of genius though ("“I was walking and talking about this bitch I met out in Boston/Who I didn’t see very often/She gonna vote for Obama and she likes to dance to Madonna/Drops her H’s like Benihana/We gonna hop in this hoopty, and she’ll take me out to movie and let me feel all up on her boobies”")

San Luis Obispo
Ever since they did a country cover of Kylie's "All The Lovers" on the Live Lounge, I've been a fan of all things country when it comes to the Sisters.  This track has a vibe all its own that even though it comes after the craziness of "Shady Love" and before the 90s-esque pop vibe of "Self Control", this fits with the album.  It has a TexMex kind of feel to it.  A little bit country and a little bit salsa.  Regardless, I like it.

Self Control
This seems like it was ripped right out of a 90s House record.  I can see Rozella or Captain Hollywood Project recording it.  It's probably the one song on the album that just seems a bit out of place because it has a different vibe all together.  It's not a bad track, just different.

Best in Me
Another song that lands very close to home.  I used to say that I always wanted to be able to see how Sean saw me because he was always able to see the best in me so to hear this song; it's like being with him again. I think that everyone needs to have the ability to feel that at one point in their life or another.  To have someone have so much faith in you that they are able to look past the flaws and see what's good.

The Secret Life of Letters
Potentially the most laconic of all the tracks on the album, this sounds like it could be a follow up to "Land of A Thousand Words" from Ta-Dah, like it's the sequel to the Bond film they previously scored.  It's got a melancholy to it that makes me also think of "Mary".

Somewhere
I think the placement of this track on the album does it in for me.  I can take it or leave it, mostly.  It does sound like a track that should have been on Night Work, though.  It's got a similar feeling to it.  Like they wanted it as a track but there wasn't room.  It's just kind of extra for me.

Ms. Matronic’s Magic Message
I still need a friend named Pickles.  Just a follow up from the kiki from earlier.  Great lead in to...

Fuck Yeah (BONUS TRACK)
Infectious? Yes.  Makes you move your ass? Hell yes.  Overall great track? Yes.  It has a spoken word by Ana and I love those more than anything.  It has a section that sounds like the theme song to The I.T. Crowd too.  It's a great way to end the album.

So there you have it. 14 reasons to buy this album.  If you read this entire thing and don't run out to buy the album, there's not much I can do for you.  That is all.