The Penelopes - Leave It All Behind 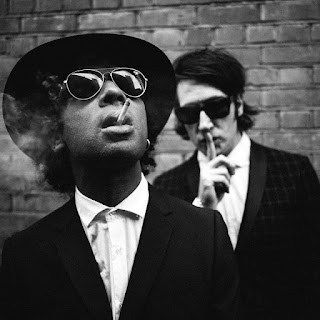 This album is the most incredible thing I think I've heard in quite some time. I am almost at a loss for words to describe how much I am in love with this album. This evokes so much nostalgia and fondness that I immediately felt a connection with the music. From the Sisters of Mercy influences to Leonard Cohen and Nick Cave with a smattering of Concrete Blonde and Siouxie and the Banshees, this album is stunning. It's not often that I absolutely geek out over an album but I've been listening to this nonstop for about three days now. I've been trying to wrap my head completely and totally around this but every time I listen to it, I get some new sound or I hear a different progression through a song and it just makes me swoon all over again.

So let's talk about this masterpiece. The vocals are absolutely spot on point with their execution. I love groups that have shared vocals between a male vocalist and a female and this is just an incredible example of how the difference between singers can be an experience that elevates the tracks to a whole new level. The way their voices compliment each other at different ends of the spectrum is so cool. His voice is like a shadow of hers and it gives such an earthy quality to the songs. They're grounded. They've got bite to them.

The synths and the production on the tracks are the perfect blend of darkwave and new wave and there's something so forward thinking about the tracks that doesn't keep them mired down in nostalgia. Yeah, there's plenty of sense memory built into all these songs because they sound like something you would have heard some where in the recesses of your memory but they are new and innovative. The use of brass in the production gives this bright and vibrant note that is super refreshing and it rounds out the sound and gives it more body.


This album seems like it's a soundtrack to a movie that you've never seen but you know you need to. I don't know who Tina is but I am genuinely concerned for her well being. The way "Mulholland Drive" ends with Tina being told to wake up is a bit worrisome. This is so perfectly put together that it evokes so many emotions and by the time you get to "Time to Shine" and it's huge, swelling, builds... you are spent - in the best way. "Time to Shine" is this song that is so massive. It's got a Sisters of Mercy feel to it with the way the vocals are sharp and precise and how they are layered over all the instrumentation. The spacy sound effects and the percussion make this song have an otherworldly feel to it. I am so enamored with this track. The rest of the album is gorgeous and has so many moments to talk about. "Roses" is a beautiful up tempo pop song that has an underlying feeling of hope and perseverance. The guitars and the "ooo oo oooo's" on "Leave Them All Behind" are just so funky that you're tapping your feet along with the song before you realize it. You hear the influences of the Cocteau Twins and so many other artists on "Tina". It's this breathlessly beautiful song about growing up and making it the best way you can.

If you aren't in love with this album by the 30 second mark in "Mulholland Drive", then I just don't know. This is EVERYTHING that a pop album should be. It's so evocative. It's fun. It's big. It's just a perfect moment in music. I am so amazed with this and if this is what they can do, I cannot wait to hear more.

Email ThisBlogThis!Share to TwitterShare to FacebookShare to Pinterest
Labels: The Penelopes