I said last week it's amazing how music comes to me because I never know how I am going to find new artists. Last night, another amazing artist just simply appeared out of the ethos.  I need you to meet Doug Baron.  I've only known him for about 12 hours now but it's been an incredible 12. 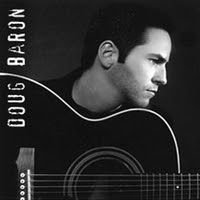 Born in New Orleans, Doug Baron's music is about as honest as the Mississippi Delta.  It's got an earthy quality to it that can only be created through years of hard work and patience.  It's got a heart and a soul of someone that has been around the block a time or two and has been scuffed up by life a little.  It's just about as pure as an American singer/songwriter can be.  The lyrics are heartfelt and honest.  The melodies are simple and uncomplicated.  But through it all beats the heart of the Mississippi river, unwavering and persistent.  It's someone that isn't going to give up or give in.  It's someone that wears those trials and tribulations as a mark of honor, not as a badge of shame.

Doug released The Blue back in 2007 and it has aged exceptionally well.  It's a mix of pop/rock/folk/country/rhythm and blues.  So I guess you could call it gumbo pop or melting pot pop.  It's very Americana because it takes so many styles and melds them together flawlessly.  He reminds me of another one of my most favorite artists, Justin Utley because he has this way of spinning a yarn and making it relateable to everyone listening.  From start to finish, it's one story after another that you are easily able to find something in that echoes something from your own experience.  His voice is easy and has a quality to it that is familiar and without pretense. "18", "The Blue", "Scarecrow" are a few of the stand out tracks and if you want to hear quality musicianship, these tracks will certainly do it.  But there aren't any bad tracks on the album.  I've listened to it several times since purchasing it last night and it is growing on me with every listen.  It's simply a great album and I want to see him do amazing things.

Doug on the Web