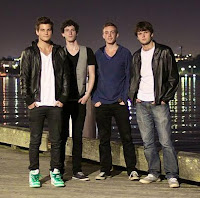 It's sometimes very interesting how I come across new music or rather how new music finds me.  I was sitting at work the other night and got a twitter notification that I had a new follower, a guy called James Whalley.  I checked out his profile then started digging deeper.  Found out he was in a band and I tracked down the website, listened to preview tracks and before I knew it, I was knee deep in a new musical obsession.  Appeasing Lindsay is a pop group made up of 4 friends from Sydney, Australia.  They formed in 2010 and started work on their debut EP, Ordinary/Beautiful with the first single released shortly thereafter.

Sweetie...Even Prom Queens Grow Old
"Good girls like bad boys because they make them look so sweet and I'll never be bad enough for you to notice me".  It's lyrics like this that makes them great.  Not mediocre but great.  The first single off the EP is an awesome radio track.  It's got an amazing hook and the chorus is scorching.  This is a super fun song but it still has that underdog quality that all the songs have.  It may be the nice guy of the EP but it's not going to finish last.

Keep Me Close
It doesn't matter what life throws at me, I am going to be right here.  To have something so dear that you are willing to stand for is what we all secretly or not so secretly desire.  There is a thread of hope that flows through the EP and this song shows such elegance in expressing that feeling.  The song is built amazingly from start to finish as a matter of fact the production of this song shows intelligence.  Did they need to add horns at the end of the song?  No, not really but what it does is add a tremendous amount of atmosphere to the song and adds a rise and fall in the crescendo of the song.  It's another layer of depth that creates a much larger feeling.

Same People, Same Places, Same Poses (feat Kid Boom)
Possibly my favorite track on the EP.  You have to stop and actually listen to the track and hear what they have to say.  Everyone has been at a place in their life when you realize that if you can just get away and find something new, things just might get better.  There is a pleading in this song that begs to be taken far away but you know you can't go so you have to just be patient and wait it out because there is an end to it all.  Whether you find meaning in this song personally or you have someone in your life that you are able to apply this song to, the more time you spend with it, it is exceptionally easy to fall head over heels with it.  A lyric as simple as "Tell me something ordinary/beautiful away from here, take me away from here" elevates this song to heights you can't imagine on the first listen through.

Friends Don't Kiss Like That
The way the chorus slowly hammers through makes this song stand out.  James' words are punctuated with percussion that drives the song forward.  It's still totally an AL song and it has the same character and charm that the rest of the songs have but it's the one on the EP that has a bit of a turn to it that makes it different.  It's not different in a good or a bad way, it just is and I think that's important because you just don't want all 5 tracks to sound identical because that becomes repetitive.  I dig this song a lot.

Some Things Are Better Left Unsaid
This is my fast song.  The guitar in this song is great.  I love the speed of the riff and then there's the rest of the song and it's not half bad either.  Again, we are working with hope and tenderness.  It's the most "synth" of all the tracks but it's totally workable and a great track.  The producers of this EP knew what they were doing when they decided to build this album because everything works so well together and each track shows a great deal of diversity for the guys.

So yeah, as you can see... I've kind of got it bad for these tracks and to be honest, it's been the only thing I've listened to since I bought it the other day.  A very wise friend of mine once told me that if you can listen to an album 10 times straight then it's a good album.  Well I think I am well above 20 times with this so that makes it an outstanding album.  Again, it's only $5 on Amazon and it's well worth every penny.  Don't order that coffee at Starbucks, buy this EP... you are going to get so much more out of it than that Venti Skinny Cap with a half shot and no whip.