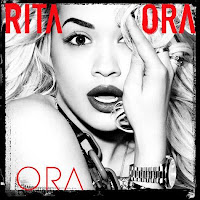 A lot of people are going to make the assumption that Jay-Z's new protege is nothing more than a Rhianna clone.  Those people would be incredibly wrong.  Other people feel her debut album, Ora is a bit anonymous.  She has worked with incredible producers on this album and each song has their flavor on it but the undercurrent through all the songs in Rita.  From Stargate to DJ Fresh to Diplo, there isn't a hot ass producer that hasn't blessed this 21 year old native of Kosovo with their talent.  From the outset with "Facemelt" you have an understanding that this album is going to let you have it.  The DJ Fresh track, "Hot Right Now" is just that...it's freaking hot.  Probably my favorite track on the album is "Roc the Life". I know it's a bit self gratifying considering she is signed to Roc Nation but it's all good.  The song is a major earworm that will tear the roof off the joint.  "Radioactive" has Sia all over it and as well it should considering she wrote it.  She shares the album with Tinie Tempah, J.Cole and will.i.am and in my opinion, the only misstep is will.i.am.  I don't like his track and wish it wasn't there.  Other bright spots are "Uneasy", "R.I.P." (written by Drake), "How We Do" and I really like "Hello, Hi, Goodbye".  "Young, Single and Sexy" is a super fun girl power anthem that will have you bobbing your head before you know it.

By now, you know that I am not going to feature an artist on this blog if I don't like them.  I didn't want to like her in the beginning but it's super hard not to.  Her voice is consistent through the album and there are bits and pieces of autotune but I don't think that detracts from the over all presentation.  If you're looking for something new and you dig powerful women, Ora is a great piece of power pop that has enough of a rock edge to it that it doesn't sound over done.  With it being her debut album, I can't wait to hear what she has to offer with her sophomore release.
at September 06, 2012