Pink - The Truth About Love 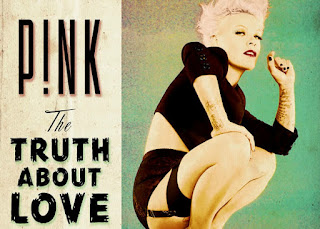 I don't write about super popular music often because I feel like they get plenty of press and I like to route for the underdog but occasionally an album comes along that is just great and I want to throw my two cents in.  P!nk's The Truth About Love is probably going to be hands down, one of my favorite albums this year. The blend of song choices from ballads to uplifting honest pop song combined with the anthemic social commentary is genius and doesn't come across as preachy or overbearing.  She has kind of become a champion of the downtrodden and the forgotten and she does an incredible job of being a positive role model through her music.  One of the coolest things that she did with this album was release a lyric video for each of the songs on the album prior to the release.  I think this did a helluva job generating interest, even though she didn't really have to try.  She has amazing guests on the album.  Lily Allen, Eminem and Nate Ruess from fun.


The album opens with a barn burner of a track in the form of "Are We All We Are" and doesn't really stop. The opening of "Blow Me (One Last Kiss)" reminds me of a Two Door Cinema Club song and it raises a clenched fist at a shitty relationship.  "Just Give Me A Reason" is her duet with Nate Ruess of fun. and the song is amazing.  It's a relationship song where the parties just aren't communicating and they are at different places in the relationship.  Their voices are great together and it's just a kick ass song.  "True Love" has Lily Allen sharing vocal duties but you don't get her until the middle eight.  Cause you know that's where everything changes.  The same can be said for Eminem on "Here Comes The Weekend".  The closing track, "The Great Escape" is probably one of my favorites.  It reminds me of "Glitter in The Air" and that's a helluva track.

The album is great.  It's pure P!nk.  It's rebellious, it's raucous, it's just a great mix of tracks.  If you're a fan of power pop or of Miss Alecia Beth Moore, then I suggest you purchase it from your favorite media outlet because you will not be disappointed.
at September 19, 2012

Email ThisBlogThis!Share to TwitterShare to FacebookShare to Pinterest
Labels: Pink