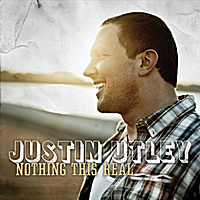 If you've been with me for any length of time, you know that Justin Utley is one of my favorite singers of all time.  His honesty and candor come through his music without any hesitation and he has this amazing ability to touch every part of the human condition without trying.  You know that I had the opportunity to see him in concert and talk to him after the show and he shared stories with me about some of his songs and where the inspiration came from.  One of the songs we talked about is a track called, "Behind My Eyes" and when I initially reviewed his album, I thought the song was about a break up but he opened up and told me that the song was actually about his aunt committing suicide before her 49th birthday.  As soon as he told me the story, my whole perception of the song changed and I immediately became emotional.  The next time I listened to the song I was alone in my truck and actually had to stop because I was crying.  There is a lyric in the song where he says, "You said that you'd be a phone call away and I still got your number, just in case." and that just gets to the soul of me because I know what it's like to lose someone that you didn't have the opportunity to say goodbye to.  Even sitting here writing this, I am getting choked up because of the earnest quality of his voice and delivery.

Today is Suicide Prevention day and Justin has made the magnanimous decision to take all the proceeds from the sale of his album this week and donate them to the Trevor Project.  If you have been wavering on the purchase of his album, this week is certainly the week to do it.  I've talked about how incredible the album is and I've talked about how amazing he is.  He will continue to be a constant source of inspiration for me and for so many young people out there.  His story is one of perseverance and never giving up despite the epic proportions of shit the universe can heap on you.  The album is less than $10 and it's probably the most important $10 you've spent all year.

Justin on the Web