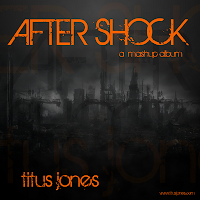 It's 12:30 and I've been fully immersed into the world of Titus Jones again. It's so easy to forget how awesome it is to be right in the middle of his art until you're there again and you don't ever want to leave. After Shock is his second release of mash ups and I use that term loosely because that's just the genre. What he does is more than just cram a handful of songs together. His music starts with a concept and he carefully selects tracks that tell his story and then he weaves them together with magic and bubble gum and string and at the end when it's all said and done, there is something new. Something that is so much greater than the sum of it's parts.

Let's look at the incredible "Fuckin' Power Rangers".  Who would have ever thought you could take the Power Rangers theme and use it as a backdrop for an empowered stand up and take charge song that features Nicki Minaj, Eminem, Ludacris & Destiny’s Child?  He just works magic and everything falls into place like it was supposed to be there all the time.  This is just one tiny example of how he does amazing things with beats and lyrics.  You never ever hear a seam where he stitched the tracks together.  It sounds like he has masters that he pulls vocals and tracks off of to work with.  It is truly amazing.


I love his selection of artists, from Ke$ha to Alex Clare to Adele to who the hell could ever think about taking Sweet Child O' Mine, Sugar, We're Going Down, Laffy Taffy and mix it with Sex & Candy?  I think he has become one of my favorite independent artists and I support everything he does.  This album is every bit as good and in most every case, better than Culture Shock.  He's taken his experiences and practiced with the the tools he has to become an amazing dj/producer.  Even though the album is a free download from his website, you should follow him on Facebook, Twitter, YouTube, Soundcloud and give him lots and lots of love.  He deserves it because he has taken the time to share his art and his love with us.

Titus on the Web