Sometimes I'm in the mood for fun and flirty music; there are other times when I need to be melencholy and morose but still there are even other times however when I want to refine my palate and listen to something more mature.  Something grown up and honest.  Something that has a little under it's belt but isn't done making it's way around the block yet.  Right now, for me, that something is Constant Crows by Matt Alber.  I had seen the video for "End of the World" back on Logo quite some time ago but I just don't think I was ready for his music at that time. 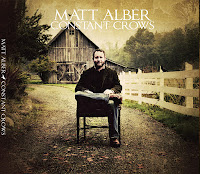 That's a concept I have grown to understand; there are some musicians and music that you have to be ready for and if you aren't you will not be able to appreciate what they have to offer.  It's taken me months and a bit of life experience myself but when I received the CD in the mail the other day, it appeared that I was ready.  From start to finish, the album contains a quiet intensity that I haven't heard in many other artists.  The songs are thoughtful and you can tell that each and everyone was crafted with the utmost level of detail.  I'm going to make a comparison and it's not about how the song sounds or even if it's reminiscent, but there is something that I when listening I hear John Denver.  I think it's the thought and emotion that's written into each lyric.  He doesn't say anything he doesn't need to say and his expression is pure and direct.

He has the ability to craft an image not many people can and his music is very evocative of the emotions he is coaxing out so effortlessly.  The production of the album is stripped down and nothing too overdone.  You can only hear instruments, no heavy digital work anywhere to be found and I think that's important when you are working with content that is this powerful.  If you were going to lump him in with other artists, I would have to say David Gray, Matt Nathanson, Rufus Wainwright or Ray LaMontagne but I hate making those correlations.  He is his own artist and I applaud him for that.  There aren't enough good things I can say without coming off as smitten so let's just say that I am incredibly glad this album has come into my life.  It is certainly going to get me a lot to chew on for a while.

I don't want to pick a stand out song because they are all works of great creativity and they all have a life of their own but "Tight Rope", "Take a Bow" and especially, "Brother Moon" are all outstanding tracks that just make me want to close my eyes and be taken where the songs want me to go.  I implore you, if you are a fan of Singer/Songwriters, Independent Artists and generally just people that have something to say, buy this album.  It's available at all major audio outlets and I promise you, it's so worth it.  There isn't enough music with a transformative nature in the world and what there is of it, we need to treasure and hold on to because it's important and it's good.  I hope to hear from Matt for years to come.