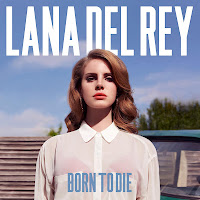 Way back in November, I wrote about Miss Del Rey and remarked how incredible her voice is.  It seems that I am not the only person that thinks so because her rise to fame is close to meteoric.  She has been written about by every blogger this side of Timbuktu and she has been on SNL and all the attention is on her right now.  I commented that her EP was incredible and "Video Games" and "Blue Jeans" were both amazing songs.  My concern was that she wasn't going to get enough diversity on her album to add any interest to the way she sings.  I was certainly wrong in that respect.  In fact, I think that the album sounds kind of schizophrenic and you don't really get to know who Lana is.  You certainly get a representation of her talents but a lot of the album seems to be all over the place.  Don't get me wrong, I don't think it's necessarily a bad thing that the album is a bit of a madcap romp through just about every square inch of the pop landscape but I would like to see her hone her focus a little on the next album.


One thing that Lana does on this album is Vamp.  And I am going to use that word in it's verb state because she vamps all over the album.  From her turn of phrase on "Video Games" to her absolute coy, sex laden usage of her sex on "Off to the Races", she is all woman and you know it fairly quickly on this album.  Not that there is anything wrong with that, she takes the tools she has and she uses them to the best of her ability and she does a damn fince job at it.  There is a definate difference in how she works the songs on the album, from her version of rapping on "National Anthem" to an almost lullaby fueled turn on "Carmen" crooning ever so sweetly. She has talent and is so fluid in her delivery that each track doesn't leave you wanting. They are mini-events that are self contained little morsels of goodness. You don't need to have any requisite knowledge from one track to another to understand where she's coming from. "Radio" is a pop ready single that could be played on the radio at any time.

Track List
Don't write this album off as kitch or a one off. I think that if she is taken care of by her label and by her fans, we can hopefully see a long fulfilling career out of Lana. There is enough about her to keep her interesting and to keep her fans guessing. There is nothing more disappointing than an artist that has exhausted all of their tricks on one album. I think she has more up her sleeve and I can't wait to see where she goes from here.