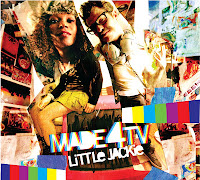 Throwback.  Retro.  Stylized.  All words that could be used to describe the sound Little Jackie has put out into the universe with their new album, Made4TV and to deny any of those labels would be counter productive.  They can be lumped into the same category as other acts such as The Like, Nikki and Rich, Amy Winehouse, and others.  What makes them unique is their content is completely and totally current with today's sentiments.  The lyrics would be great sung over any beat but when they are sung over these nostalgiclly inspired sounds, it creates quite a fusion of sound.

Little Jackie is made up of Imani Coppola and Adam Pallin.  You may know Imani for her late 90s release, Chupacabra which spawned the single, "Legend of a Cowgirl".  I've been a fan of hers since then and I enjoy her solo work quite a bit.  But I do what I can to make sure I don't judge her new work off her old stuff.  Someone told me, "Don't judge me by my past, I don't live their anymore" and I think that is very true for Miss Coppola.   Adam Pallin, I am less than familiar with, but I know that he has worked with Chiddy Bang and I am a fan therefore I have a predisposition to like his other work.

Made4TV is all over the spectrum from Rock and Roll to Rhythm and Blues to Doo Wap with funk and soul covering all the bare spots.  The album is charged with not only unrequited sexual energy but also a tremndous amount of chemistry between Imani and Adam.  Songs like "31 Flavors", "Cock Block" and "Time of Your Life" may seem a bit over the top at first but when you actually listen to them they are less hardcore sex romps and more erotic adventures.  From start to finish the album has a ton of character and with not so much in the way of expectations of the new sound, it's hard not to be let down.  Imani's is totally capable of running all over the musical spectrum and she does a bang up job of it without ever sounding like she's over extended herself or done something she shouldn't have.  I can totally close my eyes and see Little Jackie opening up for the one and only Diana Ross and the Supremes at any point in their career.

It's a helluva album and it was released on Bandcamp so every penny made from the album sales go straight to the artist.  It's a full length album and it only costs $12 so you aren't getting raked over the coals.  I highly recommend this album to any one that's a fan of this sound or the artist.  You won't be disappointed.