Aiden James - Trouble With This 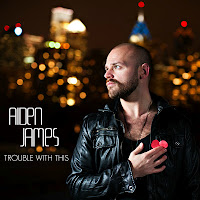 There are 2 types of male artists in my world, singer/songwriters and dance artists.  There is no grey area with male dance artists; either they are great or they aren't.  Singer/Songwriters have a little more leeway and give but when you're an artist of Aiden's caliber, you really don't have to rely on any trickery.  He has the ability to straddle the lines of both categories and dow so with a smile.  I don't really remember how I ran across him but it was recently and I started scouring YouTube (like you do) to find anything and everything I could because I wanted to know as much as I could about him.  I have since purchased 2 of his albums and they are amazing.

Both are unmistakably him but at the same time, they are extremely divergent of each other.  Each has it's own space that it occupies and they both have an individual feeling all of their own.  The first album I bought, On The Run is very rootsy, very stripped down with almost a country feel to it.  Trouble With This has more of a pop music feel to it.  The songs are a bit more produced with more of a "synthetic style" to them, not that there is anything wrong with that.  Some of the vocals still have the smallest country influences to them and I think that adds a depth of character to the tracks.  His voice is versatile enough to do either and he does not have to stretch at all.  Both albums have a great diversity of sound to them and when you just shuffle through them, you get to learn a great deal about Aiden and it makes for an awesome experience.

Trouble With This starts off with "Best Shot" and it's a super romantic romp that will have you bobbing along before you know it.  The album doesn't diverge off this track through the remaining tracks and it is all tailored to work so perfectly with Aiden's voice.  He has the ability to draw you in and bring you into his world without even really trying.  "Snapshot", "Next To You", "Gonna Hurt More" and "My Only" are probably the songs that made the biggest impact on me.  Gonna Hurt More is just so soulful and you can feel it through his words without a shadow of a doubt.

It's amazing how many amazing independent artists I have come across as of lately and I am glad to put Aiden in this category.  Like all the indie artists I talk about, make sure you support his music and his art because it's the fans that are going to make a difference and make it where he can create more music.