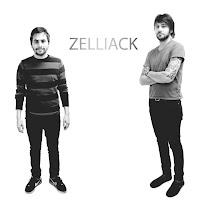 You've probably never heard of Zelliack and that's fine (for now) but I am going to introduce you to probably the most important group you've heard of in the past 10 years.  Zelliack is a group comprised of Zack Ordway and Elliot Coleman and they hail from Texas/Maryland.  Their sound is a fusion of jazz, funk, rhythm and blues, pop, rock and a dash of smoothness that can only be described as legendary.  What makes this band an incredible feat to behold is not the fact they are masters of the smooth groove but the fact this is a super creative outlet for our band members.  What's that mean, you say?  Zack and Elliot are 2 of the main members of another group called Sky Eats Airplane.  To best appreciate their music, listen here.  Come on back when you're done and finish this review.  So are you surprised?  Maybe a little.  Both groups are amazing at what they do and they both have the ability to spread their message to two different sets of people.

When you sit down to listen to this EP, you are immediately wrapped in the silky goodness that is created when these two gentlemen create their art.  The songs are rich and filled with so many lush moments it's hard to pick one specific song or breakdown that is better than another.  Some of the songs are just so expansive but every second is jam packed with wall to wall sound that all comes together to bring  you an intense experience not like many I've heard in the music industry.  "These Hands" was the first song I heard off the EP and I immediately fell head over heels with the band,  Elliot's vocals are hands down some of the most controlled I have ever heard.  The places he can go are just ridiculous and what he is able to do on "These Hands" makes you immediately melt and become putty in those hands.  It's hard to say that some songs are super smooth and others aren't because they all are.  Each track has so much character and you can hear that they love what they do.  "Hargrove" is just this song that takes you all over the place and has so many different feelings and genres in it I am going to have to call it Gumbo Pop because they just pulled everything out of the fridge and threw it in a pot.  All five tracks just build on one another to create a total experience.  And by the last refrain of the bluesy, "Call Me Old Fashioned" you are just satisfied all over.  They do things that not many can and for that I am grateful.

One of the coolest things I think they did was release the album on BandCamp, a service that allows the artists to interact directly with the fans, no middleman, no overhead.  Just the band and the fans.  On top of removing all the excess baggage, they priced the album so that you pay what you want for it.  I think this is an amazing concept.  They start it at $1 and if that's what you want to pay, then so be it.  I'll call you a dick if you do because it's worth so much more.  It's an album that will get played over and over and they deserve every penny they earn from it because I tell you, and I am not lying, you are going to play the shit out of this record.  You have someone you want to slow things down with and set the mood... Noir Tone.  You want to impress your friends and show them that you are a classy guy... Noir Tone.  You want to wash away the dirt and the grime of a shitty day... Noir Tone.  It's going to pay you back so give til it hurts.  Zack and Elliot did.

Email ThisBlogThis!Share to TwitterShare to FacebookShare to Pinterest
Labels: Zelliack