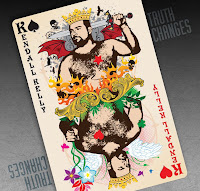 It's been a minute since I broke a record down but I feel like I have to with this album because every song needs to be discussed. One of the things that has always impressed me about Kendall is that he is unwavering in his dedication to his beliefs.  He has a point of view and he is passionate about it.  And it's this passion that is exuded in everything he does and you can see and hear it without a shadow of a doubt.  His music has always been an unconventional mix of pop, hip hop, rock and a little bit of anything else he can fit in.

His subject matter has ranged from super serious to quirky and esoteric but something has changed in Kendall between his previous release and Truth Changes.  I don't know what it is, exactly but his sound has matured so much and the songs have a depth of character that I haven't seen out of him yet.  In my opinion, this is by far his best outing as an artist and I am excited to call myself a fan.

1.  Last Train
Starting the album out with a song about an ending may be a strange place to start out but I think it sets the stage for the overall tone of the album.  Much like other songs, it is a dirge of a song compared to alot of Kendall's previous work.

2.  Boom Box
One of the "poppier" songs on the album.  You can definitely bob your head to it and shake your booty a bit but it still has a bit of an edge to it.  Even the songs that are more upbeat still have an bit of an unease to them and it seems like each of them has a deep, dark past brewing somewhere.

3.  Living In My Headphones
Keeping with the weightiness of the album, LIMH is an amazing hip hop song that lays on you heavily and the intelligence level behind the lyrics is off the charts.  I wrote a review of the song/video last week so I won't go heavily into this song but know it's by far one of my favorites on the album.

4.  Do You Know How Sexy You Are
These are the words that people want to hear from someone else.  To know there is someone out there that feels this way is probably one of the more important things a person can feel.  Just to have someone give you this type of affirmation can be the most incredible thing ever.  And everyone needs to have the opportunity to feel it at least once in their life.

5.  Never Be Removed From My Heart
The video for this song has left an indelible mark on my vision for it.  I think that the treatment Kendall worked up utilizing the voodoo images and shamanistic tendencies are perfect.  It sounds like a modernization of an old spiritual song that would have been sung by Haitian immigrants fleeing Port-au-Prince in the 1800s.  Another haunting song that just resonates with you long after you've stopped listening to it.

6.  Bring Back The Days
This song!  This song is incredible.  The production is top notch and spot on and Kendall sounds so freaking amazing in it.  This is the song that makes you long for a time when things weren't as complicated, when you had that one moment where everything was in line and the universe was smiling down on you.  When you're having one of those days when it seems like you're lost, this track will immediately make you feel like all is right in the world again.

7.  It Doesn't Have To Be A Dream
Electro Pop is alive and well in this track.  This song is sparkily and bubbly, like putting some Fresca on your panty liner.  You quickly find yourself bobbing your head without even thinking about it and yet again, the lyrics have a deeper meaning.  How many times have you found yourself in the club and there's someone that you can't get out of your mind but they don't notice you.  If you could just get the gumption to walk over and talk about them but there's something stopping you so you spend far too much time in your head with them.  It's something that has happened to every one of us at one time or another.

8.  Stanley
How many layers are in this song?  There are so many elements that it just envelopes you, from the whistling to the harmonica (and I LOVE a harmonica), to the sounds of the cell doors opening and closing combined with the sound of the chain gang.  With the mixing and scratching, this song is so urban but it has an element of age that is timeless.  There is more character created in the 4:27 of this song than some authors can do in 1000 pages.  You feel the longing and the loneliness Kendall is projecting throughout the track.  I honestly think that this song is the absolute underdog on the whole album and I can listen to it over and over.  I have this whole prison romance written in my head between Ken and Stanley and I can see scenes of Stanley walking through the yard and fights breaking out.  I LOVE this song because of the imagery it invokes.

9.  Deeper Than Blue
A year ago, I heard this song and it stuck with me and touched me.  I wrote about it back then so here's the link to the write-up.  I love this song today as much as I did a year ago.

10.  Darker Than Black
Dangerous is how I described this song.  Untrustworthy and fear inducing.  If you weren't on the verge of being emotionally spent by this track, what he is able to invoke with this song may just push you over the edge because it is a workout in emotional excess.  That is not a bad thing, as a matter of fact - this is one of my favorite songs on the whole album because of what it does to me.  It's got a point of view and it is quite easily overlooked as one of the up tempo songs but don't get fooled.  This track has teeth.

11.  There's A Skip On The Record
After Darker Than Black, the placement of this song is an incredible choice.  As fun as this song is, it's the sorbet after your meal that cleanses your palette and makes you ready for the rest of your night (or the rest of the album, as it were).  I don't mean to downplay this song at all, it's not juts cotton candy fluff and no substance.  Even the general idea of their being a skip on a record makes something not quite right but you can't let that stop you.  This is kind of my acknowledge and move on song.  It may seem like a huge thing, but you have to just work through it.

12.  A World Of Strangers
Have you ever felt totally alone in room full of people?  Does anyone ever really know you?  Do you ever really know yourself?  Do you ever feel like you are alone for what you believe in?  What happens when you meet that one person that has the same baggage as you?  This is my question song because it makes me ask a million questions and makes me be all inward and perform self realization.

13.  Spiders
Varied are the influences in this track but more than anything I hear one of the most solid electro-clash songs ever.  Manic and break beat is the overall feeling you are left with.  This is the hardest song for me to be able to find meaning to and I think it's because it is a super thoughtful song.  I hear broken relationships and anguish and the use of The Itsy Bitsy Spider in the middle eight gives this song a very "Danny Elfman" feeling  and it kind of strikes that same uneasy area like Darker Than Black.  I hear remorse and regret for throwing something away when a snap judgement had been made.  I dig the song it just dances all around and is hard to catch.

14.  Clothes Get In The Way
This is evocative of the eccentric nature of Kendall but it's not a beat around the bush kind of song.  Why waste time, we've gotten to know each other and now it's simply time to put your money where my mouth is and get down to business.  You know you want it as much as I do so what the hell is taking so long.  It's a super fun song and it tells it like it is.  You know by now I am a huge fan of Kendall as a rapper and I am not disappointed in this song in the least.

15.  Toast
As if I wasn't a puddle of mush by now, he ends the album with nothing but him and a piano.  He's stripped everything away from you (even your clothes) and leaving you with a super uplifting-ish song.  His voice is totally focused and laser like in his execution.  It's time to go our separate ways and it's time to say good bye but I want to wish you all the luck and all the success you can have.  Its hopeful and its melodic and it's an ending but don't be sad.  Look back on our experiences and pull strength from them because you can do it.

Old fans and new ones alike will find this album a welcome progression of his sound and where he is going in not only his career but with his message and his meaning.  I think like most people that as we get older our priorities change and our overall outlook on life is influenced by out experiences and this album is a reflection of that; like most successful artists, he has incorporated those experiences into his work and it makes for an amazing journey.  This is the most mature I've heard him and there is so much growth on this album it shines through like a beacon.

I think this year has started off amazing for me, musically as it were and I am so glad this album is in my life because it is an outstanding example of what is good and right when an artist cares about their medium.

I want to thank Kendall for being a part of my life with his words and his stories and tall tales.  If there were other artists as passionate about music as he was, the world would be a better place but I am glad he's out there.
at January 24, 2012

Email ThisBlogThis!Share to TwitterShare to FacebookShare to Pinterest
Labels: Kendall