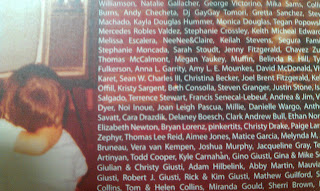 The first EP released by the Bay Area duo, The Limousines was put out in 2009 and titled Scrapbook.  They made the decision to rerelease it in Vinyl and CD format at the beginning of the year and because the album had so much history and meaning to the band, they wanted to add an additional layer of importance to the disc by allowing their fans to add a dedication to the liner notes.  There was no way I was going to pass up the opportunity so I thought about it.  How did I want to leave my mark?  What was important enough for me to inscribe forever?  How about the 2 most important men in my life? Yeah, that's where I wanted to go with it so I thought about it and decided I would do it like this:

It allowed me to have us all together in one name and it recognized both of the guys in my life that mean more to me than my life itself.  To my left is Sean, the man who made me who I am as an adult.  And to my right is Charles, my best friend in the whole world.  The one that knows me better than I know myself these days.  And adding the Roman numeral III, we are all together as one unit.  So I submitted my dedication and today I received the CD and much to my happiness, there it is; printed for all the world to see and for those in the know - probably one of the most important pieces of writing in my history. 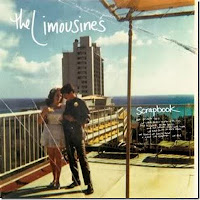 It's everything I wanted and more.  I'm not sure if it's because I know have a piece of real estate claimed in the liner notes, but the album has so much meaning and heart.  Their most recent release, Get Sharp is a fantastic journey through excess and has this exuberance that I haven't heard in many other artists.  And while that album is full of an extravagant attitude that makes you take notice, Scrapbook has a quiet strength that doesn't need fanfare.  It's understated and honest.  It's nostalgic and it's comfortable.  It's sitting down with a box of memories and remembering all the good that has happened but never forgetting the trials that make the memories bittersweet.  It's not jarring and it doesn't take unnecessary risks.

Eric's vocals are solid and full of the smallest nuances that just pull you in and makes you part of something bigger and Gio's production is nothing short of stellar.  I really don't know why they aren't major superstars but I'm glad they are on the level they are because they don't forget their fans and they make sure we are given more than 100% with everything they do.  If you get the opportunity to see them live, do it.  I saw them with The Sounds and it was an experience that I am never going to forget.  They have quickly and easily become one of my most favorite bands of all time and this EP only cements that decision. I just have so much emotion now wrapped up in this album, I think to write about each song won't properly do them justice.  It is an amazing piece of art and I will cherish it more than you realize.
at January 24, 2012

Email ThisBlogThis!Share to TwitterShare to FacebookShare to Pinterest
Labels: The Limousines