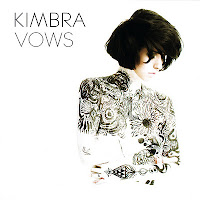 I never wanted children before now, but I have to have a child named Nebraska Jones now and I can thank Kimbra for that.  How cool is that verse.  I think that it says so much about Kimbra's debut album, Vows. The lyrics are clever and full of charm all the way through.  I realize I am slow at getting to this album, but apparently it took me a bit to get around to her.  I was first introduced to New Zealand based, Kimbra Johnson months ago when a friend showed me the video for "Cameo Lover" but I just let other music get in front of her.

You have to be careful of listening to just single tracks off this album because you can get easily fooled.  It's not a situation where you've been hit with the old bait and switch but you have to realize that this whole album is like a giant sampler platter that showcases her range beautifully.  Every song is punctuated by her gorgeous voice but the ease and grace she jumps from genre to genre is almost mind boggling.  For someone that is so young to have the control she has over her instrument is incredible.  She has been compared to Bjork, Florence Welch and Nina Simone and it is very easy to see how those comparisons can be made.  This album is a treat because it's one that you can start at track one and play all the way through without skipping a song, yes it's that good.  For me all the tracks are strong, but I think "Settle Down", "Good Intent", are stand out tracks with the rest falling very close behind them.  There isn't a bad track and each song seems so carefully crafted to give the listener something new around each corner.  "Cameo Lover" is a mix between a modern R & B song smashed together, beautifully I might add, with a song from the Motown Era.  Make sure you listen closely to "Call Me" because she samples "Electric Relaxation" by A Tribe Called Quest.  Bravo, my dear! Well played.


I am going to compare this album, in scope and concept, to The Arch-Android by Janelle Monae.  Much like Janelle's album, it is far reaching and broad but it never over extends itself.  It knows when to take itself seriously and when to take a step back and let it's hair down.  I honestly think that this album is easily one of the best I have heard in a long time because it touches every part of my senses, from smoky, sultry jazz to pop and everything in between and because of that I leave feeling satisfied.  The American version of the Settle Down EP is now available and I think we are going to be hearing a lot more from Miss Kimbra.  She has only just begun and with collaborations with groups like Miami Horror and Goyte, she is on the way up. Catch her now before she is a mega superstar and you will not be disappointed.
at January 31, 2012

Email ThisBlogThis!Share to TwitterShare to FacebookShare to Pinterest
Labels: Kimbra