Foxy Shazam - The Church of Rock and Roll 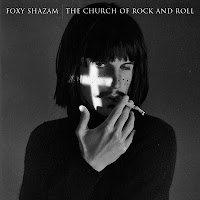 I feel there has been a gap in the music industry for pure, unadulterated rock and roll.  I'm talking about over the top, balls to the wall, unapologetic American Rock and Roll.  The type of music that just takes over and makes you forget all your troubles.  So when I started listening to Cincinnati based Foxy Shazam's new album, The Church of Rock and Roll I totally felt like I had been welcomed home by an old friend.  From start to finish, this album is nothing short of amazing.  There wasn't a whole lot of room for improvement on their last album being as it was one of the best albums released in 2010 so to say this album seems more polished and refined is a bit weird to actually say, but it's true.  I don't think I can fault this album at all.

From the opening riffs of "Welcome to the Church of Rock and Roll" to "Freedom", this album is a rollicking romp through musical excess and only in the best sense of every note.  The composition of every song is so strong and full of every best intention that it's hard to pick any faults at all.  The album is packed with songs like "Forever Together" and "(It's) Too Late Baby" show that the band has grown and matured and are totally comfortable standing on their feet as balladeers but other songs like "I Like It", "Holy Touch" and "The Streets" accentuate the their ability to rock your face off with heavy guitar riffs and mind blowing choruses.  This isn't a concept album or anything experimental, it's just a great example of what unfiltered rock and roll with a point of view sounds like.


You hear all the time that Eric Nally and the guys have picked up where Queen or The Darkness have left off and it is so easy to see those comparisons can be made but I need to make it clear, Foxy Shazam is in no way a one dimensional band that is just mimicking those other groups.  They have their own sound, their own feeling and more than anything they are their own group.  If there are influences taken from the other bands, it is a only done in the most humbling manner possible to pay homage to the history that is so rich.  I can't say enough how good this album is.  There is enough content packed into these 11 songs to make the album feel twice as big.  If you get a chance to see them in concert, do so; especially their upcoming tour with The Darkness.  It's going to be massive and just so full of bad ass rock and roll you will not be disappointed.

The album is available on Vinyl, CD and Digital at all reputable audio outlets and you should pick it up in one or more format because it needs to be in your collection.  This album is already going in my Top 25 of 2012, most probably one of my Top 5.
at January 30, 2012