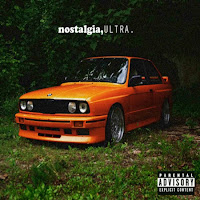 Someone had played "Novacane" for me and I thought it was a pretty cool song.   I didn't really pursue it much after that more than just the casual listen every now and then.  Frank Ocean wasn't necessarily on my radar because I'm not the biggest R&B fan.  There are artists that I really enjoy and there are those that I know by reputation but I don't actively pursue the scene.  So it wasn't until I read that Frank had come out that I wanted to know more.  The article that he wrote to express his coming out was expertly written as if he agonized over each word he chose.  Making sure the pictures that were painted were evocative and just filled with the sincerest amount of emotion.  It was one of the most incredible things I've read in a long time and my heart went out for him because of the pride I felt for him and because I know the road he is facing is going to be daunting at best.  The Hip Hop/R&B community is not necessarily welcoming when it comes to homosexuality and he has stepped up and drawn a line in the sand.


"I sat there and told my friend how I felt. I wept as the words left my mouth. I grieved for them, know I could never take them back for myself. He patted my back. He said kind things. He did his best, but he wouldn’t admit the same."

My main reason for downloading the album was because he had come out. I wanted to know more about this man and what he stood for. Was the reason I downloaded it the right one? I don't know but I have listened to Nostalgia, ULTRA many times now and I can honestly say, sexuality aside; it was one of the best things that I have done in a while.  It is so clean and well put together.  I love how he has crafted the album, using tape recorder sounds to make it sound more authentic.  He has pulled dialog from Eyes Wide Shut and named the interludes after video games (Street Fighter, Goldeneye, Soul Calibur).  The actual songs on the mix tape are brilliantly written.  The nostalgic take on "Strawberry Swing" immediately transports me back to when I was a child playing with my brothers on a hot summer day.  "Lovecrimes" is incredible.  The way it slows down toward the end just creates this sense of drama and draws a picture of an ending.  The juxtoposition of the heartfelt lyrics against the bounce beat of "There Will Be Tears" takes that song to a whole new level.  Probably one of the coolest thing he's done is pull the track from "Hotel California" and dances all over it like he's been doing it all his life in "American Wedding".  That song is incredible.  On "Nature Feels", he pulls from MGMT's, "Electric Feel" and does a damn fine job killing it.


"I believe that marriage isn't
Between a man and woman but between love and love".

It's quite clear that I'm a bit smitten with this album.  I hope the hip-hop community embraces this change and allows him the room to fly.  He has the potential to do amazing things for a community that is rife with homophobia and gay bashing.  Support him when his album comes out on July 17th and let him know that it doesn't matter who he sleeps with, his music is important and he is important.
at July 07, 2012