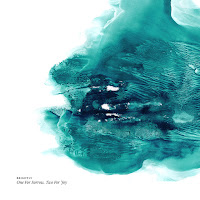 Obsessed. I am absolutely obsessed with Brightly. I had the opportunity to meet him in Nashville during the Bingham Cup and got to hang out with him in a very loud bar which made conversation very hard but when he got up and sang, I immediately fell in love. There's a kindness to not only his demeanor but his stage persona as well. He was one of the most humble and down to earth individuals I've ever seen live. It was almost as if he was worried that this crowd of rowdy ruggers would not get what he was putting out there. I don't know if they did but I stood there in rapt attention as he easily wooed the crowd.

His Australian accent is not normalized when he sings which I think is a pretty amazing thing because it gives his music so much more character and differentiates it from the Indie pop scene that he could easily be shuffled into. He's one part Folk music and one part EDM and a ton of just Brightly. I don't do a lot of comparisons to other artists, as you know if you've read my blog for any given length of time and even if I did, I think his style is experimental and edgy enough that there aren't many artists that I would even compare him to. He's just Brightly. And for that I am grateful.

His music videos are experiences. Whether it's "Preflight Nerves" or "Rugby" or "I Will Never Let You Go", his integration of technology into the video sets him apart from so many other artists. "Preflight Nerves" was featured by Google as an amazing example of the melding of music and technology in a mixed media platform. It received over half a million views and won a ton of awards.

"I Will Never Let You Go" is an experience that you have to take on your own. Don't do it on your phone. Find a desktop or a laptop and experience the whole thing. Watching it on YouTube or on your phone robs you of the full experience. It's a gorgeous, moving, heartfelt exchange between he and you and it's well worth every minute.

His latest album, "One for Sorrow, Two for Joy" was released today and I cannot stop listening to it. It's amazing how easily he's able to encapsulate the human existence in this one album. The man has lived more life than most people I know and he's got a beautiful voice in which he shares those experiences with us. There's a melancholy to the album. There's a bit of sadness and it's twinged a little with some morose feelings of longing and loneliness. Those are all feelings that we tend to shy away from but they're integral to make sure that we know the good from the bad. They're the thing that help keep us grounded and when someone wants has the ability to express them for us, it's important for us to listen and hear what they have to say.