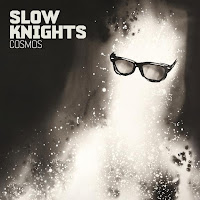 Take one of the most prolific bands of the last 20 years, add in 5 of the most varied vocalists to share duties and put it all under the creative control of Derek Gruen aka Del Marquis and what you have is the funkiest album released in a very very long time.  Slow Knights is a cooperative made up of Derek Gruen, Xavier, Rod Thomas, Mykal Kilgore, Bridget Barkan, Chrissi Poland, and The New Power Generation.  Yes, I said The New Power Generation.  Yes, they did release a few albums with a little known artist known as Prince. So as the stars align and the universe takes a collective sigh, Cosmos was born.

This album is perhaps the most refreshing piece of work I have heard in a long time.  I've spent a ton of time lately listening to very heavy singer/songwriter type stuff and a lot of the themes have weighed very heavy on me.  To be able to throw this record on and just listen to it and let it take me where it needs to was more of a blessing than I had expected.  You just settle into the album and you're immediately swept away to a place where The Jetts are "Rocking It To You", Madonna is still on "Holiday", Expose has taken you past the "Point of No Return" and Nu Shooz still "Can't Wait". All the coolest kids are just hanging out grooving to this album. I even get some Laura Branigan realness on "Kingdom"  Don't misunderstand this isn't just some cotton candy fluff that leaves you on a sugar high with no filling.  The album still has depth and weight and a point of view, it's just wrapped in the funkiest packaging you could ever want.  What that does for the tracks is make them so much easier to disseminate and to enjoy.  It's very Mary Poppins of Derek and his production.  He's provided us the "spoonful of sugar" as it were and the medicine is handled.

Each of the five vocalists bring something totally different to the table and they add their own unique point of view to the album.  They are the individual pieces in the spring collection and they all stand on their own but you put them together and it brings it all together and you go, "I totally get it now".  The only issue I have is that I am not 100% familiar with each vocalist so I have to study to tell them apart on some of the tracks.  I know Rod Thomas from his Bright Light Bright Light work so he's immediately recognizable.  The way the tracks are arranged on the album is genius too.  I'm sitting and listening to it and after "Under Attack"  I think to myself, I want a female vocal now and lo and behold, "I Got It That Bad" sweeps and and gives me everything I need.  There are no stand out tracks on the album because they are all wonderful.  They all have a meaning and a purpose and because there is enough variation between the songs, you can easily put it on and go from start to finish without ever once feeling the need to skip a song.  I love "Legendary Children" and "Sweet Harmony" because they are so different from each other.  "Legendary Children" is so uplifting and positive where "Sweet Harmony" makes me want to slow dance and get close.  I'm talking close.

The album sampler doesn't do the tracks justice, in my opinion because they end up like paint swatches in the hardware store.  You don't fully get to experience it as a whole.  Once you are able to hear the songs in their entirety, it's that point where you have the wall painted and you are able to appreciate the full vision.  But the sampler does give you a bit of an idea of the brilliance you are going to experience.