I'm sure there's some point where you cannot simply gush enough over an artist and I don't think I've hit it yet so I'll need you guys to help me find that balance.  Tuesday night I had the pleasure of being in the crowd for the last stop on Delta Rae's current tour and all I can say is wow.  This is the second time I've seen them live and I had heard the hype that with each show, they bring something different that you have to be there to fully appreciate and it's true. They have an amazing quality about them that is bigger than stage presence.  It's how they fill the space and I think the root is that they are doing something they love and have a great time doing.  The music connects us all together and it is so easy to feel what they bring to the table because it's palatable. It's organic and it's got a fluidity to it that can only be felt in the moment.  It's the expressions on their faces and the intensity in their voices that just doesn't translate to recording. Yeah, I can record their live performances and they are fantastic to watch back and relive but it's the electricity of the crowd as you are swept up and away into this collective head space and for the next hour and a half - they are telling your stories and expressing your emotions in a manner that you just never could.  They are saying the words you need to say but just can't.  They are making you smile and feel loved and give love like you haven't before.  Yeah, I'm pretty biased.

The show was at The Mercy Lounge in Nashville, which provided an intimate venue for about 300 of their closest friends and the atmosphere was just amazing.  Like the last time I saw them, they had 2 opening acts; Jillette Johnson and Lera Lynn.  Jillette is this really cool earthy singer songwriter that has this smoky quality to her voice and a brilliance when she's telling stories.  She did this song called, "Cameron" that hit me in the feeling spot and I fell for her head over heels.  Lera Lynn is the lead singer of a band of the same name.  She had a more Western vibe than Jillette and did a pretty damn amazing job too.  She had a steel guitar and accordion as guest stars in her set that filled out her sound.  She is definitely worth a second listen and as soon as I get her album listened to enough, I will probably drop a review here. 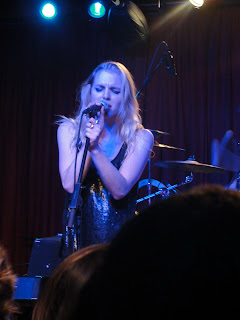 So our headliners take the stage to a much anticipated round of thunderous applause and launch into their set.  For the next hour and a half, the audience just bends and shifts with ease at each change and movement through the set.  What we got were some unexpected arrangements.  There was a bit of a new intro to "Is There Anyone Out There" (My personal favorite song) and Brittany did a little bluesy-sultry action on the chorus in "Fire" which was totally unexpected and she even wagged a finger at us later and said, "Ha! I surprised you, didn't I?" And she did, it was a really great addition to a song that I already love.  There was also a little remix action happening at the end of "Dance In The Graveyards" that called for some audience participation.

Each member of the band had an opportunity to shine and it was every bit deserved.  Grant's solos on Fire The Chain were inspired as was anytime Mike really got to pound out a driving beat.  I don't know how he doesn't break drumsticks because he is serious about his craft and you feel it in your chest.  I mean the two of them together are on of the most dangerous rhythm sections in music today.  They are simply incredible and two of the nicest guys you will ever meet.

They were very humble as usual and Brittany told us how she was a bit weary from being on the road for as long as they had been but the interaction from the audience was enough to rejuvenate her soul.  They joked with the audience talking about how attractive everyone was and Ian said his siblings were being shallow and he thought we all were very intelligent and had great personalities to match.  They are just the best people in the world.  Salt of the Earth doesn't do them enough justice.  They are the people you want your children to grow up to be and the ones you want your sons and daughters to bring home to meet the family.  I made a comment on Facebook that I am blessed to have these 6 people in my life and that's not something I say lightly or take for granted.  I am very thankful for their music and their friendship.  They have gotten me through more than one rough spot and I can never fully put into words what their music fully means to me.

Then next time they go out on the road, you would be remiss to not catch as many shows as you can because they are self contained moments of brilliance that can't be replicated.

That's actually my video I captured of them doing, "Hey, Hey, Hey".  It's dark because I didn't want to turn the flash on my camera and blind them all as they were singing.  I was trying to be super considerate.

Set List
Morning Comes
Holding on to Good
Cold Day
Is There Anyone Out There
Forgive The Children We Once Were
Whatcha Thinkin Bout, Baby
Oh! Darlin
Unlike Any Other
Bottom of the River
The Chain
If I Loved You
Fire
Dance in The Graveyards
Hey, Hey, Hey
at March 21, 2013