There are times when you can just sit back and trust an artist.  It's these times when you don't mind turning all control over to them and letting them do what they do best.  I wish these moments came more often but when they do happen, you cherish them because they are all the more special.  As corny as those two sentences are, when talking about the debut album from Penguin Prison, every word is true.  He knows what he's doing and there aren't many people that can work their way around a synthesizer like he can.  Chris Glover grew up on the Upper East Side of Manhattan and had some pretty diverse musical influences ranging from Johnny Cash to Aaron Neville.  Being in New York City, he was influenced by the city and the culture and everyone around him. 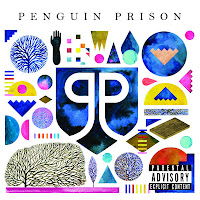 Those influences have made a huge impact in his musical career and you can hear them coming through in his music.  Over the past handful of years, he has been releasing single after single and finally has compiled them all into an amazing album that is nothing more than pure synthpop magic.  From the opening beat in Don't Fuck With My Money to the outro of Someone Got Everything, this album defied every expectation I had of it. The first single I heard a year or so ago was Fair Warning and I immediately fell in love with his talent and the message he represented in his music.  The album doesn't reinvent the wheel but it takes the best of the genre and makes the best possible use of all the tools available.  There isn't a low point in the album and it's one of the only albums in a long time that I can just throw on and listen from start to finish.  A Funny Thing is one of the high points in the album and I think it's probably one of my favorite tracks.  The video below is an exclusive video performance he did in Paris of A Funny Thing.   Take a minute to listen to it and then go buy the album.  It's well worth it.