Placing 4th in this year's X-Factor, Cher Lloyd got a recording contract from Simon Cowell on his SyCo label. I don't care what you think about Simon Cowell, he knows music and has had remarkable success propelling acts to the top (Leona Lewis anyone?).  Her debut album, Sticks and Stones is full on twee-pop realized.  What sets her apart from other "Twee-pop" acts like Eliza Doolittle or Lily Allen is that she is also a pretty talented rapper.  On several of the songs she easily transitions from rapping to singing like most of us do putting on our clothes.  She's got some pretty impressive guests on the album in the form of Busta Rhymes, Carolina Liar and Mike Posner.  It's a super fun album and from start to finish and doesn't really offer anything new to the game.  She takes what she knows how to do and honors those standards. 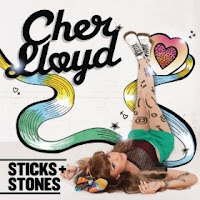 If you saw her on X-Factor, then you'll probably be a fan of the album and what she has to offer.  New fans are going to take a little convincing to come around but I think it's not going to be to terribly hard.  The singles that have been released so far are "Swagger Jagger" and "With Ur Love". Swagger Jagger is an interesting song in that the chorus and the hook are nothing more than the children's song "Oh My Darling Clementine" and for me this took away from the song and made it more difficult to like.  However, she redeemed herself somewhat on "With  Ur Love" because it's more of an all out Pop song.  My favorite track on the album would have to be "Grow Up" because I like hearing her rap and the cameo by Busta Rhymes is pretty cool.  "Dub on the Track" is supposed to be her harder side but to me it just kind of tries to hard.  The repetition of "I'm the kind of girl that puts dub on the track" doesn't really do it for me and makes me ask, who are you trying to convince?

The album isn't perfect but it takes what it does and does well with it.  It's fun and playful and you can dance to it.  The remixes of the songs are going to be killer and will probably sound amazing in clubs.  Give it a listen on Spotify and see what you think.
at November 27, 2011