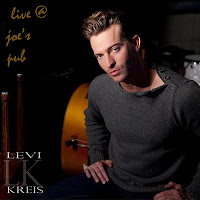 Soul, Blues, Jazz, Gospel, Pop, Rock...all these could be used to describe Levi Kreis.  You could also throw in Tony Award Winner, Television Celebrity, Soundtrack Contributor and a whole host of other descriptors but what they all don't seem to do is properly define who/what Levi Kreis is all about.  If you want to do that, then you need to listen to this album to get maybe a 10th of a percent of understanding about this man.  This is where Levi is at his best, when it's him and a piano.  You don't hear people talking or singing along which tells me they were so enamored with the performance they couldn't do anything but sit and listen.  It's very easy to see how they are mesmerized because he is so engaging and charismatic and those are not things that can be bought or sold.  His voice is pure and unfiltered on this recording and it just makes you feel.

Live @ Joe's Pub was recorded on February 28, 2011 at his last stop on the SidexSide tour where he performed along with Eric Himan and and Jason Anton.  I don't know anything about the venue but from the mastering on the album, it sounds like a small tight club where everyone was able to have their own experience with these artists in a manner that larger venues can't provide.  Levi takes you on a trip through his rise to popularity at this show and you get a glimpse into his process and how he became the artist he is today.

One of the first things you'll hear in this album is humility and honesty.  He speaks from a place that can only be described as heartfelt.  Being someone that had to come to terms with how a small portion of his life was going to affect his chance at his dream, Levi is exceptionally frank throughout the retelling of his past.  This type of honesty can only come from someone that has made peace with his parts and is totally all right where he is in life.

So much could be said about his music but the thing that always comes back to me every time  I listen to an album is how I feel like I've been taken to church and had my faith refilled a little more from each and every track.  I've talked about honesty and I'll throw integrity into the mix.  His voice speaks from a place of sincerity and makes you feel like you are part of something bigger than yourself.  It helps you understand that you aren't alone in your struggles and that no matter how alone you are, there are people that have been there too.  I have so much respect for Levi I can't properly express it.  His message is about acceptance and love and that's something that we all could use a little more of each and every day.

Here's a video clip from the performance at Joe's.  It's a cover of Bonnie Raitt's "I Can't Make You Love Me"


I've talked about it over and over. Don't steal this album. Go buy it on iTunes or Amazon or eMusic. Don't be a dick. It's the little guys that make a difference and help artists like Levi continue to do the work they do that makes our world a little bit brighter.
at November 29, 2011