Most people won't have a clue who Samantha Newark is because you've never really seen her face.  Her voice, however spoke to millions of children growing up in the 80s and for me; it's a voice that brings back so many memories of simpler days and much more of a carefree attitude.  A time when you would wake up at 6 AM on a Saturday morning with a bowl of your favorite cereal and sit in front of the television until noon and then you were kicked outside to go play.  During that time, one of the greatest of things in the world was Jem.  I am going to make my one obligatory, "Truly, Truly, Truly Outrageous" because she was.  The cartoon was so far ahead of it's time and it had something for everyone.  It was full of amazing music, action and adventure, love and romance and most importantly friendship.  The stories were actually pretty mature without being preachy and they were just fun.  To this day, I consider myself a Jem Boy and I will be until I die.  Samantha Newark was the speaking voice of Jem and her civilian alter ego, Jerica.  If you aren't familiar with Jem, you can find her all over the web so I won't go into it.  I'll post some links at the end of this post to give you head start if you need it. 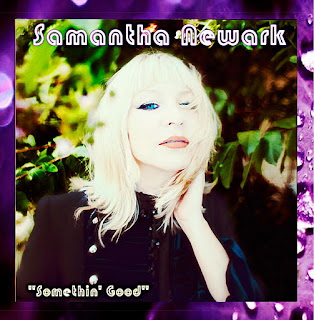 2011 marked the release of Sam's new album Something Good. which is the first album off her own label but it is not her first foray into the music industry.  She has been compared to Sophie Ellis Bexor, Traci Lords and Goldfrapp and I can easily see where those comparisons have been made but I think she has so much more to offer than just being considered a replica of existing artists.  Her music is approachable and is filled with so much passion it is exuded through every beat and every carefully placed lyric.  There is a retro-ish vibe (and I hate saying that but it's the easiest way to describe it) to the album that allows the album to take you a very familiar place but then you quickly learn that Sam doesn't want you to get too comfortable there because she's about to shake things up and take you on a journey with her.


The album comes blasting out of the gates with the heavily danceable track, "I Got Everything".  The staccato rhythm and pounding bass drive this song forward with a steady intention to get you off your ass and get you moving.  There is no way possible for you to not want to move when this track comes on.  The pre-chorus is so sharp and decisive that it  pushes you with full force through the song.  From there we move into the synth heavy love affair and super sexy track, "Hands on Me" that takes you to the mile high club without ever leaving the ground.  "Blue Sea" is haunting and her vocals are filled with such longing it just draws you in.  Her voice takes on a very sensual quality on the super sexy "Lover" and it has such a distinct quality to it.  Each track proves more than the last that Sam's experience in the music industry has been put to good use.  Her voice is so strong and has so much character that you just want to be there with her and at no time do you feel like you are being pandered to.

Even though this is her journey that she has invited us on, I never felt out of place or like an intruder in something too personal.  I think that is something that is amazing about musicians, they let us into their world and we get to know them more and more as they open up.  If you have read my blog at all, you know how important music is to me and how quality music makes life so much better.  There are moments when her voice reminds me of the group Betty, who I am a HUGE fan of, and there is just so much texture to it and when it's layered on top of amazingly crafted tracks there is a depth of experience you aren't going to get anywhere else.

She could have easily parlayed her experience as Jem into this album and gone the easy route but she didn't and that is probably one of the most amazing decisions she could have made.  There is enough separation in this work and Jem/Jerica that it easily stands on it's own two feet and dares you to think other wise, but it pays enough homage to her history that fans of her as the iconic singer are going to love her much more.  She has also made a very wise decision to have the perfect balance of amped up BPMs to slower tracks that give the album a ton of body and isn't just cotton candy fluff.

I'd like to say I'm not biased but that would be a lie.  As a fan of her voice over work, I hoped like hell that I would fall deeply in love with this album and I was not disappointed.  My only disappointment was not getting to GMX in Nashville and getting to meet her in person but now that I have this album under my belt, I  can thank her for that at the next convention.

Buy the album.  Don't be a dick and steal it.  It's $9.99 on her website and other reputable music outlets, like Amazon and iTunes.  Support the independent artists because they are going to represent more of what you want than the multi-million dollart artists that are singing someone elses songs.  And for the record, this album is Truly, truly, truly outrageous!