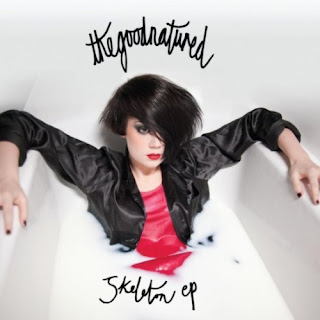 Upon first listen, "Skeleton" by The Good Natured is a super infectious synth pop album with track after track that will get stuck in your head.  But when you listen right below the surface, you'll hear a bit of darkness trying to get out.  Not a lot of darkness, think of this more as "I Can't Believe It's Not Siouxsie and the Banshees".  It's Darkwave-lite.  It's 80s goth culture with training wheels.  Now I realize what I just typed and how hokey and gimmicky that can sound, but if you give it a shot, you'll probably not be disappointed. To some extent, even some of Sarah's visuals are evocative of Our Lady of Melancholy, Miss Sioux, herself.  This is an outstanding way to introduce people to this type of music because The Good Natured make it very ground floor.  You can step right into their sound and you won't feel intimidated.

There are quite a few things about this EP that I like.  Each song has it's own personality and they are all a bit different from each other.  There is an overarching theme through the entire record so it's not disjointed and you have a good sense of who The Good Natured are by the end of the 6 tracks and a remix.  Skeleton,  the single, not the album title, was an amazing choice by the band.  It's more mainstream and has more mass appeal than songs like Hourglass or Be My Animal.  It's an earworm of a song and the chorus will get stuck in your head without trying.  Sarah's vocals are another thing I really like.  Most British accents fade away but not hers.  It is loud and proud and gives the album more depth.  It's one of those things where people say even a British accent can class the joint up and it does.  I dig this album and know it's going to stay in heavy rotation in my library for quite some time.  Do yourself a favor and pick it up because it's super fun and it'll have you digging out your Concrete Blonde and Bauhaus albums before you know it.

Email ThisBlogThis!Share to TwitterShare to FacebookShare to Pinterest
Labels: The Good Natured