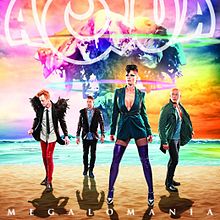 So before there was a Katy Perry or a Lady Gaga there was Lene Nystrøm and the boys in Aqua.  Their brand of feel good, up tempo, quirky pop has filled the airwaves for over a decade and they have a super strong international following to prove it.  I feel like a total tool because they released an album this year and I had no idea until this week.  I am a fan, have been, always will be and I was super pumped to listen to this project.  I ran to youtube first and searched for videos from the album and found 2, How R U Doin and Playmate to Jesus.  They are the first 2 singles released from the album and I sat and watched enthralled because again, I am a huge fan.  I was not let down by either video and felt they were both worthy editions to the Aqua discography.

How R U Doin is in the same vein as the majority of radio type songs that Aqua has released, a super catchy pop song with back and forth vocals between Lene and Rene.  The video is a post apocalyptic car chase between Lene and Rene and it's a pretty awesome companion to the song.


Playmate to Jesus was an outstanding choice for a second single because it is in direct opposition to the video for How R U Doin.  Not many people think of Aqua as being a band that makes music that is thoughtful and even.  If you look at songs like Turn Back Time you would know they can make music that isn't poppy and bubbly.

Playmate to Jesus
Dirty Little Pop Song
Kill Myself
Like a Robot
Viva Las Vegas
No Party Patrol
Come n' Get It
Sucker for a Superstar
Be My Saviour Tonight
How R U Doin?
If the World Didn't Suck (We Would All Fall Off)

I love all the songs because they all have a point of view.  Lene's voice has never been stronger and the production values are on par with any other pop album released today.  The only song on the album I wasn't totally in love with was Viva Las Vegas because I'm just not a fan of songs like this that are more like a song that was created by the Nevada tourist board to get people to come visit beautiful Las Vegas.

Like a Robot, Playmate to Jesus, If the World Didn't Suck (We Would All Fall Off) are my favorite songs and I think they have the biggest point of view.  Like a Robot totally took me by surprise and I won't spoil it for you if you take the opportunity to listen to it.

It's a great pop album and an outstanding addition to their discography.  I wish everyone liked them as much as I do because they deserve to be respected as a real group and not just a novelty act that released Barbie Girl.
at October 04, 2011

Email ThisBlogThis!Share to TwitterShare to FacebookShare to Pinterest
Labels: Aqua