Alex Clare - The Lateness of the Hour

I was curious when I read a tweet from Blake Lewis about this amazing album was so I immediately started researching him.  This man is one of the most talented artists I have found in quite sometime.  If you take a soul singer and give him some of the most powerful lyrics I've heard in some time then you give him producers like Switch and Diplo and you have a style of music that is new, innovative and thought provoking.  Alex Clare, a native Londoner has brought a level of sophistication and style to the musical community that I haven't experienced in a long time. 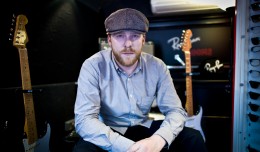 The album comes out of the gate swinging with a Dancehall inspired power anthem in the form of "Up All Night".  The song is a raucous adventure that builds and swells through the entire 3 minutes and leaves you exhausted at end of the track.  This song has some pretty amazing use of Alex's voice as it is fast and shows how he can keep pace with the ragga feel laid down by the producers.  The rest of the album is a showcase of where he can go and what he can do.  "Treading Water" is so full of passion and remorse of a man confronted with his past indiscretions when he sees a woman that reminds him of an ex.  The beat throbs and pushes the song forward at almost breakneck speeds that only add to the over all feeling of being overwhelmed.  Hummingbird is another example of how versatile Alex's vocal range can be.  For me, this song is actually an auditory illustration of  a Hummingbird in mid air, it darts and weaves all over the place and everywhere the song goes, you have to follow it.  I think other shining examples of the range on this album come from the super sexy, "Hands are Clever" which is a totally different vibe than anything else on the album.  This track is more of an earthy, doing your thing kind of track that would make Earth, Wind and Fire proud to call it one of their own.  It's more on the funky side of soul and it's not out of place on the album at all.  "I Love You" is a stripped down vocal exercise in tenderness that Alex belts out with ease and effortlessness.

The album is outstanding and the only problem I have is that it's not actually available for purchase in the United States without buying an expensive import.  It's my issue that I wish would be corrected.  I think because of the internet, the music industry needs to realize that they really aren't dealing with a localized national market and from the go they need to make the music available internationally because that's the influence the internet has created.  Watch his videos on youtube, fan him on Facebook and maybe they will open up the records sales to America so that I can patronize him and give him my money as well, because I want to support him and his endeavors.