Kids at the Bar, K.Flay, The Limousines and The Sounds at The Mad Hatter in Cincinnati 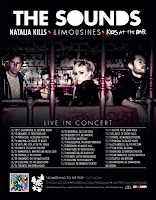 Last night was possibly one of the most amazing concerts I think I've been to.  I've not been to a lot of concerts but a wide variety so this is another amazing entry in my book.  First and foremost; the venue, The Mad Hatter was one of the best I have ever been in.  All 4 acts were heavy on synth and electro so by nature of the beast the bass was going to be heavy all night long and the speakers and the acoustics in the building never once felt overwrought or full of distortion.  There was enough room for everyone and I really didn't feel too crowded.  We stayed right around 20-25 feet from the stage at any given time so we were able to be right near the acts.  Drinks were priced about the same as any other venue that caters to live bands like this type of show.  So now onto the show itself...

Doors were scheduled to open at 7 and they did.  The staff did a great job getting people shuffled into the club without a big fuss which speaks volumes about the professionalism of the staff and their experience in handling concerts.

Kids at the Bar (www.facebook.com/kidsatthebar)

These guys were integral to the show as they kept everything flowing.  The thing about DJs is they can either enhance an experience or hamper it and that has everything to do with the skill of the DJs.  Kids at the Bar are made up of Chad “Rad” Raunborg and Matt Buckley from Oklahoma City and have started to make a name for themselves by being signed to FrankMusik's record label and they have the skill to back up this signing.  Some DJ's just spin records.  Some DJ's create mashups and play them at a show and other DJs actually create art on stage from nothing.  Now I realize there has to be a plan and purpose behind where they want to go so it all can't be improvised but what these guys do on stage is as live and as on point as a DJ can be.  From the beginning of the set to the last notes, they handled their business like that, business. You could tell they were feeding off the audience and it was apparent that they enjoyed their job but the professionalism behind what they did made the whole set just resonate with awesomeness.  There were one or two bits where transitions didn't go as smoothly as I think they would have liked but all in all, there wasn't a bit of their set that was sloppy or amateurish.  At one point, Rad made the comment that this was just an "intimate dance party" and I can see how they can go from that to a huge rave with their sound and no one would even notice a difference.  I don't think it would matter to them if they were spinning for 2 people or two thousand, they came do do a job and they did it.  Charles asked them if they played Bar Mitzvahs and they said that originally they were "Kids at the Bar Mitzvah" but needed a wider appeal so they changed their name :)

When I heard that Natalia Kills had been replaced, I didnt' know how to feel about it.  I was really looking forward to the venue with 4 artists I was familiar with and was confident that I would have a good time.  I started researching K. and much to my surprise, I was well impressed.  What got me right off the bat was the fact that her lyrical content was intelligent.  I mean like nerd smart.  She has a vocabulary and can work rhymes out that aren't childish and she doesn't resort to making up things with her rhyming scheme so that it all fits, she has a gift.  The girl has talent.  One of the first tracks I heard was "Waiting" which samples, Alex Clare's "Relax my Beloved" and I was hooked.  Without a doubt, I was a fan.  As an independent MC, I think she has more to prove that mainstream rappers because she doesn't have a production team writing for her and as an artist, I can see how that would be challenging.  What you don't see on paper though, is that this girl is bad.  She has breath control and can flow for days.  I don't know how many syllables she can spit per minute but she is on it.  Her voice has this raspy-ness to it that is punctuated with these stops that just enhance the her whole feel.  I want to put her in the same category as other independent MCs like Theophilus London and Matisyahu because I think that's where she deserves to be.   I want to see amazing things for her because they are hers for the taking.  I got to talk to her for a minute at the show and had like this 30 second connection that made me super excited.  I look forward to hearing her new projects and I want nothing but good for her because she is brilliant.

This is where my fandom started.  I am a fan of these guys and I was excited about seeing them live.  The things they can do with lights, a smoke machine and their sound make them so much bigger than just 2 guys. The connection that Eric makes with the audience is palpable and it's clear why people love them.  They ran through a good selection of their tracks and it gave old and new fans a great sense of who they are and what they want to do.  From "Very Busy People" to "Fine Art", they had so much energy and the crowd reacted accordingly.  As awesome as the previous acts were, you could tell this is where people came to see.  The things that Giovanni did with an iPad made me silly because it was amazing from hammering on the keyboard app plugged into his mixer to using the accelerometer to bend sound.  One of my most favorite parts of their set was their cover of Paul Simon's, "Call me Al".  It was a total surprise and their treatment of the track was thoughtful and you could tell they wanted to honer the original but give it a total Limousines makeover and it was good.  If you have the opportunity to see them live, do it.  I think they would sound awesome anywhere but in a club at night where they can work their visual magic as well....that's the business right there.

One of the things I've wanted to make sure I did before I shuffle off this mortal coil was get the opportunity to see a Swedish band in concert because I love Swedish pop so much and I am glad to say that I can check that off my list.  The Sounds are one of the most amazing groups I've heard in a long time because their sound can go from very small and intimate (Night after Night) to loud, raucous stadium rock (Dance with the Devil).  After seeing 3 bands, I was sure that their set was going to be 45 minutes tops....I was wrong, they gave us nearly 2 hours of music and it ran the gamut of their catalog.  I didn't realize how big their music library was and the songs I'd never heard before are amazing because I have a whole new appreciation for the group.  Maja has a stage presence about her that mesmerizes you and makes you pay attention to her and she leads that band with such charisma it's not funny.  The interacted with the crowd and made each and every person in the venue feel like we were part of something bigger.  On "Night after Night", there is something to be said about 200 people belting out a ballad like this one and it actually sounded amazing.  Bigger songs, like "Seven Days a Week" and "Tony the Beat" were still sung by everyone that knew the words and their love for the band only intensified the overall feeling in the club.  Another thing I wasn't aware of was how amazingly hot Felix Rodriguez, the lead guitarist was.  I mean, he is pretty much sex on legs and when I wasn't paying attention to Maja....he had my full attention, but a lot of that had to do with his rock and roll presence as well.   Again, another band that you need to see in concert to fully appreciate what they have to offer.
at October 24, 2011

Email ThisBlogThis!Share to TwitterShare to FacebookShare to Pinterest
Labels: K.Flay, Kids at the Bar, The Limousines, The Sounds