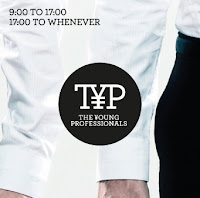 I come in from school one day to see a media mailing envelope on the table for me with a return address of Tel Aviv. That's in Israel for those of you that may not know. Israel, man. I mean...wow. At first I didn't want to open it because I was so excited and I didn't want to destroy the envelope. But I wanted the CD inside more than not opening it. So open it I did.

Concept albums can either go one of two ways. They can be amazing and leave you awestruck or they can just be horrid wastes of time that no one but the artist get. 9:00 to 17:00, 17:00 to Whenever is the former. This album is so amazing I can't begin to fully express how awesome it is. The album takes you through the day of a young professional. The official release says, "The album sports an original concept, with each track designated to accompany an hour in the day of a Young Professional - from barely awake email check, to morning coffee, a drive to the office, lunch break to dinner, straight through to the bar, club and after-party."

The first two singles off the album (D.I.S.C.O and 20 Seconds) come from the 17:00 to Whenever portion of the album and as soon as the album makes the switch from work to play, you can tell. The beats are harder, the tempo is faster and there is a no holds barred attitude that come along with the tracks. Ivri Lider has an amazing grasp of the English language and I think it was a bold move on their part to release it as an English language album. There are more notable tracks on the album than forgettable. With Me is clearly the best choice to open the album and it is probably my most favorite of all the tracks. It is a slow, melodic track that eases you into the day in the life of a Young Professional. "I know I might take you home and watch you fall asleep", Ivri says as he is opening himself up to a chance at love. Dirty Message is a cheeky take on sexting between Ivri and his boyfriend as he sneaks off to the bathroom to take dirty pictures. Fuck off Berlin is a bawdy track that took me by surprise and I love it.

I think what amazes me the most is how honest this album is. I think I was naive about what this type of album would sound like and each and every expectation was shattered. I have since researched Ivri Lider and he makes some of the most amazing music. I don't know how much the cultural difference plays on my enjoyment of his music because I know there are sentiments and values that are different when dealing with what I have been exposed to and what he has been. This is probably one of the best albums you'll purchase. That I can guarantee. Support the independent artist because they are amazing and you will not be disappointed.

Email ThisBlogThis!Share to TwitterShare to FacebookShare to Pinterest
Labels: The Young Professionals