Osvaldo Supino - When I Think About Sex 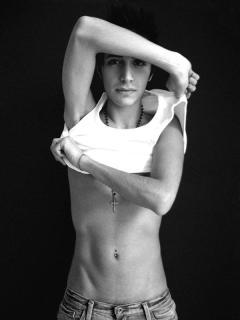 I have truly become a fan of all music from all over the world.  Some of my most favorite bands are Swedish or Australian, so when I get the opportunity to open up a new country and have a new experience, I do so with the same excitement that I did as a kid on Christmas.  This was the same kind of energy I had when I came across Osvaldo Supino who hails from Italy.  I haven't gotten to add an Italian artist to the mix and this is a pretty awesome place to start.  The majority of his website is in Italian and I don't speak it so it's hard to learn about him from there.  What I do know is he is generating some steam and has a bit of controversy in his bag of tricks.  I like that because it makes him a bit unpredictable and exciting.

The track that I picked up on youtube (and is featured below) is a teaser for the release of the full song on iTunes.  I however came late to the party because it was released today and I didn't get much teasing. (ah ha, you like that...how I threw a sexual innuendo in a review of a track about sex)  I think that when I get to hear the whole track I am going to be giggling like a school girl because the teaser is fun and full of promise.

The lyrics are so cheeky and just make me smile ear to ear because they are not only tinged with a bit of naughtiness but there is an innocence that comes through his voice that gives the song an added layer of sex appeal. And plus who doesn't want to be the object of someone else's sexual fantasy.  I think the validation that you are that person has enough universal appeal that this song could be a huge club hit.  Not only that but there is enough bass pounding through the track to vibrate you in places you hadn't thought about.  I can't wait to hear the whole track so that I can talk more about it because I think you are all going to like it.

It always amazes me when artists that use English as a second language sing in English because when it's good and they are on most of the time it doesn't sound like rote memorization or muscle memory.  This is the same with Osvaldo, you can hear his accent bleeding through...like Sergey Lazarev or Maja Ivarsson from The Sounds and it gives the track another added layer of flavor and dimension.  Give the video a shot and let me know what you think.  I want to hear more from him and I hope his career is taking off in Italy.