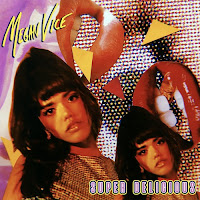 Vanity 6, The Mary Jane Girls, Seduction, Sweet Sensation and all those amazing freestyle groups of the late 80s, early 90s had this take no prisoners attitude the endeared them to millions. Coupled with the ability to make amazingly poppy music that had your ass moving to the funk grooves, these groups were trailblazers for upbeat bubblegummy pop stars and they're damn important in music history. It's groups like this that have paved the way for New York native, Megan Vice. "Super Delicious" is her latest single and just like all the guilty pleasures she's singing about in this track, I damn sure want more and more. It's one of the most amazingly fun songs I've heard in a long time and it's now my pick for gorgeous summer bop.

If this was just a song with no substance and was just all filler, it would be totally different but she's got a voice that won't stop and she's working with a producer that knows exactly what to do to elevate her to new heights. I've listened to other tracks on her SoundCloud and she's not just a flash in the pan. She's got the vocal talent and the savvy it takes to be a superstar. You can hear how all those artists I've mentioned have influenced her sound and she'd fit perfectly at Paisley Park in the late 80s. It's like all the best people have come together to create an amazing track that has you so freaking happy by the time the pre-chorus kicks in. There's not a misstep in this song. From the nostalgic 80s style freestyle beats to her smoky voice to how the layers and levels are all perfectly crafted to make an rad dance track. I bet this song would sound absolutely amazing in a club and since it's already got a near perfect start, remixes are only going to send this song into the stratosphere.

It's such a tongue-in-cheek song that doesn't take itself too seriously and I think that's something we need more of in the music world. I talk about music with a message a lot. I talk about songs that help our mental health and this is no different. It's upbeat and it's fun and makes you smile so hard. Even though it's not tackling hard issues, it's still got a perfect purpose in any playlist. It's a beautifully put together summer song and I'm glad I have it to listen to as I have my windows rolled down bopping down the street.
at June 03, 2019