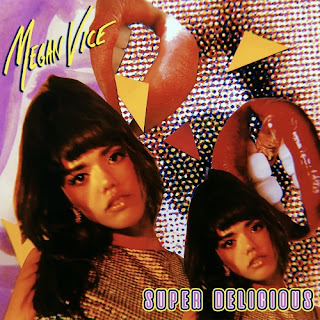 
There's something very special about Megan Vice. Something that someone recognized early on and know just how to make the best out of what she has to offer. Her performance quality is nothing but unadulterated start power wrapped up in ﻿a pop princess. She's been paired with a production team that knows exactly, and I mean exactly, how to best utilize her talents. There is not a single on this EP that doesn't just coming out banging. She's fun. She's playful. She's not relying on a gimmick. She's doing everything perfectly right and I'm damn glad to be living in a world where she is releasing music. Long Island native, Megan has been enamored with music all her life and would literally perform for anyone that would stand still long enough. And once she started formulating her own lyrics, there was nothing to stop her. She's had some pretty powerful musical comparisons and it's easy to see how people could compare her to the likes of Chromeo, early Janet Jackson, or even Sofi Tukker.
When you listen to her music, you hear an amalgamation of all these styles and influences and it would be easy for an unpolished artist to get lost in the crush of genres. You get a bit of late 80s, big haired freestyle in the vein of Sweet Sensation or Debbie Deb. You get a bit of Minneapolis in the form of Prince and Janet Jackson. You get a bit Joan Jett with her take no prisoners attitude. You get all of these different artists and styles packaged in what I feel is one of the absolute best albums of 2019. Probably in my top 5 of the year right now. I spend a lot of time talking about emotions and mental health on this blog. I talk about how music affects us and how artists are able to pull from all our deepest, darkest places and how much it's important for music to serve a purpose. And I feel that Super Delicious EP does exactly what it sets out to do. It makes you forget all the small stuff that's been getting you down and lets you relax and enjoy a musical journey in 30 minutes or less.
So let's get into this EP.

Super Delicious
Easily and quite simply my bop for the summer. This song is light and airy and full of funk potential (and it lives up to every bit of it). It's crazy how a song about making the same mistake over and over can be so damn danceable. The way the chorus rises up to meet Megan's voice is one of the most incredible things I've heard in a long time. I wrote a whole piece about this single over here so go read it after you finish here.
Hold Up (Be My Lady)
If you're in the mood for a bit of 90s R&B realness, a bit of Xscape or Jade then you're in for a damn treat on this slow-ish jam  with one of the coolest raps in the middle eight that I've heard in a long time. It shows the incredible versatility Megan has and how much swag she's leaning on and it's pretty bad ass. It's a song with a bass line that slaps hard and a groove that hits harder. Her voice is so sultry and full on this track about being hollered at and I'm here for every minute of it. Again, her producers know EXACTLY how to work with her and it's never more evident than it is on this track.
2 Good 4 Me
Again, we're rocking the funk groove here but we're going to step back a bit further in time with a disco inspired track that will make you dance. She's got some falsetto happening and it's an amazing contrast to her smoky voice. The bass is so sticky and funky on this that it makes all the polyester in your closet come to life and pull a John Travolta stroll down the block. This song is nostalgic and it's current at the same time. It's the best of all the influences she's pulled from and I guarantee that this sounds MASSIVE in a dance club.
Dressed to Kill
Here's my take....Megan is chilling in Ibiza and Kylie Minogue comes in and blesses her with all the pop power she ever needs and this song comes out. This is full on danceable gorgeousness and it makes me think of the most amazing up tempo tracks that Kylie has released. And that's not biting her style, in my ears it's a beautiful homage to a pop star with longevity and a proven formula for success. We're not straying away from what works the best with Megan's vocal stylings. We're kicking the funky grooves and beats and giving all her best friends an amazing track to dance to.
Nobody Freakin'
Let's drop back into that slow-ish R&B/funk vibe with this track. It's got one of the best uses of synth on the album and it has a tip of the hat to one Ms. Jackson...if you're nasty and it's great. She's got a way of creating lyrics that hit you and you go....damn..... When she says, "Never ever fuck for the fame".... I was like....Wig, snatched. Acne, cleared. Debts, paid. And I LIVE for it.
This is a heavy contender for my album of the year. I want her to have all the fame possible. I want her to be a household name but I also am super protective of her because of how much I connect with her music. She's incredible and I know she's got an incredible career ahead of her. As long as she's taken care of by her producers, she's going to go a long way and we need more of her music out there in the world. That's for damn sure.
at June 20, 2019