"What happened to us…We used to be free."

Whether it's reminiscing over a lost romance or it's wanting to remember a time in which we were less constrained, Johny Dar has created an ode to nostalgia. This track just resonates with me on a very deep level as it makes me reevaluate decisions I've made in my life that have led me to where I am now. Decisions that caused me to feel trapped and feel less free. Music like this is dangerous because it has a very deep, important message wrapped up in a fluid, mercury-like package that's shifting and moving as it works it's way into our psyche. It's not a bad thing but you get so caught up in how the song moves and pulses that by the time you understand that you're being reflective of your own experiences it's wrapped it's musical grasp around you and it's taken hold. 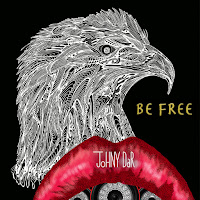 I've listened to the track over and over for about the past 15 minutes now and from the way the song is constructed to Johny's vocals; there doesn't seem to be a misstep here. It's not overworked. It's not beating you over the head with a message. The thoughts and feelings it evokes are not done in a ham-fisted manner. The exposition of the song lets you make up your own mind where it takes you but in the end you are left with a feeling of calm and peacefulness. There's a new wave quality to Johny's vocals and the production has enough of a synthwave quality to it that it has a nostalgic quality to the overall track but it's also got a future leaning quality that makes it new and inventive.
at October 19, 2017