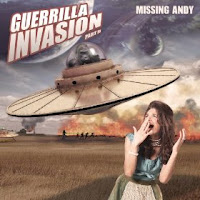 I think it's safe to say that Missing Andy have created not one but two albums that should cement their place in music history.  In previous articles I've written about the band, I have talked about how I can hear "this influence" or "that influence" but at the end of the day with these two albums, the only thing I can hear is Missing Andy.  Sure I still hear some ska and some mod but that's part of who they are.  The 20 tracks they have given us run the gamut from upbeat and poppy to very introspective and somber.  It seems they have experienced a ton of emotions since Generation Silenced.  It's almost as if they had something to prove with that album but now they are just letting the world know, this is who we are and you can be with us or not. I've run into a several albums lately that have been very flat.  There are no surprises or anything that generates interest more than the one note that attracted me to the album.  These two albums, however, have broken me off of that plateau of sameness and given me a ton of feelings and material to digest.  Ranging from political to emotional and a little bit of everything in between, these albums have a tremendous amount to say.  There are times when you're tapping your feet to the incredibly well crafted track when you stop to listen to what Alex is singing and you have to stop and say, "Damn - that's heavy".  It always amazes me how songwriters are able to take thoughts and feelings that we've all had and create something so universally digestible that we all can connect to it.

I honestly cannot find a single song that isn't worthy and deserving to be on these albums.  One of the most intelligent marketing ideas I've ever been privy to was the release of the Acoustic EP.  It gave fans the chance to preview the new material and when the albums came out, the familiarity they had with the songs made the experience more personal because you know the songs.  You know the lyrics and you've spent time with them but what's amazing is how the non-acoustic arrangements give them a new edge.  "Mr. Policeman", "Slip Away" and "Young Disciple" are filled out and much bigger.  "It's Over" should never be anything other than acoustic.  Just Alex and Steve doing what they do amazingly.


I love all 20 songs, there's no question about that but there are some that I can connect with more than the others. "Otherside", "All I Need", "Breathless", "Glorious" are just incredible tracks that all have a quality about them that make them stand a bit taller but not better than other tracks.  I want to write more about the music but it stands on it's own.  It doesn't need me to talk about it's merits because it has a life of it's own and a breadth and a depth of character.

Both albums are available on all major music outlets.  I got mine on Amazon for less than $20 for both albums.  Help bring this band to the level of fame they deserve because I think they are one of the greatest bands of our time.  From socially conscious lyrics to the expression of emotions we all have experienced at one time or another.

Missing Andy on the Web